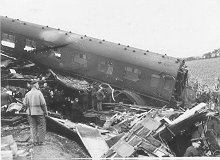 The train crash resulted in 43 deaths. The chaos of the wreckage was so great, no-one could work out what had happened to all the carriages. It was like 'a cross between a battlefield and a bombing raid.'
The Dacorum Heritage Trust 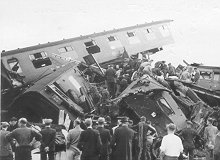 The inhabitants of the hamlet of Bourne End had been enjoying a VJ day party when the train suddenly derailed. The uneaten sandwiches and sausage rolls were welcomed by the survivors and the Berkhamsted Women's Voluntary Service quickly provided urns of hot tea
The Dacorum Heritage Trust 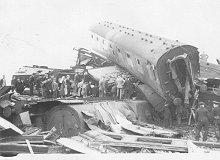 St John's ambulance crews arrived on the horrific scene within 20 minutes, from Berkhamsted and Hemel Hempstead sections, joined later by the teams from Watford
The Dacorum Heritage Trust 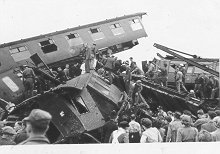 It is likely that this photo was taken by an American serviceman, based at Bovingdon Airfield. There is an American truck in the foreground. Capt. McCallum phoned his airbase as he circled the scene of the wreckage at 9.05am on 30 September 1945. This action fortunately alerted the emergency services.
The Dacorum Heritage Trust

The area was full of clothing, shoes, a crushed box of flowers and magazines - all now sad relics of the lives of the deceased and injured.
The Dacorum Heritage Trust 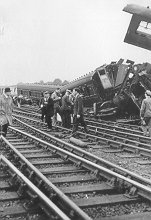 Ambulances rushed to the site in the usually quiet backwater of Bourne End from all parts of Dacorum and beyond. No praise could be too great for the assistance provided by local people and the USAAF.
The Dacorum Heritage Trust

As the sun rose on the morning of Sunday, 30 September 1945, just after all the traumas of the Second World War, the 4.23 am  Perth to Euston Express train the ‘Royal Artilleryman’ reached Bourne End and derailed right in front of the signal box.  Dacorum, in spite of being on one of the most heavily used stretches of line in the country, had seen relatively few rail disasters, but this one was agreed at the time to be the worst for over 30 years.  The train was packed with 700 passengers, many of them servicemen and women.  It shot past the points whilst moving at speeds of between 60-70mph from the fast to the slow line.  No-one could ask Driver Sidney Swaby or Fireman Walter Jones why they were going so fast, since they both perished.

A total of 43 people were killed, and 64 seriously injured. It was witnessed by am American pilot, Capt. McCallum, who had just taken off from the USAAF base at Bovingdon. He immediately radioed his base for help and the emergency services were soon alerted.

The train consisted of 15 carriages. The first carriage, a luggage van, was completely crushed and the second carriage was flung at right angles above it. The floor of the third carriage was ripped out and it was pointing into the air at an angle of 45 degrees. The fourth carriage lay alongside it in the field; the rest were spread-eagled across the track.

Mr and Mrs E Johnson of Pix Farmhouse, Bourne End, were among the first on the scene. They heard the hissing noise of escaping steam as the engine ploughed off the embankment into the field and promptly telephoned the Berkhamsted police.  The signalman, Harry Nash, watched in horror as the disaster unfolded before his eyes.

The rescue operations were very well organised, with help from National Fire Services, the Red Cross, St John’s nurses, ex- Civil Defence workers and the Women’s Voluntary Service, as well as local people. In his book ‘Bourne End Rail Disaster 1945’, Ray Potter describes how one rescue vehicle ploughed through a field of mangel-wurzels which shot into the air like grenades. There were many tragedies, including the deaths of several young brides. The casualties were taken to the West Herts. Hospital in Hemel Hempstead, where staff dealt with the minor injuries, shock, fractures and amputations. Those who had died were taken to the mortuary at Berkhamsted to await identification.  Many could only be identified from personal possessions, such as rings or toys.

The Ministry of War Transport Inquiry into the disaster was opened at Watford on 4 October 1945.  It was headed by Lt. Col. Sir Alan Mount who, with the railway officials, first visited the site. The District Engineer stated that the whole of the crossover area at Bourne End had been entirely re-laid with new metal just two years before. The signals consisted of a double yellow, indicating that there would be a changeover on to the slow line because of engineering operations in Watford tunnel. A Glasgow train had passed through safely only ten minutes previously. It was therefore presumed that the mysterious crash was due to an error made by the driver.  The inspector told the inquiry he laid no blame, but the railway companies should consider some kind of automatic train control to warn of speed restrictions ahead and, in some cases, to automatically apply the brakes.  Sound advice indeed!

Thanks to Ray Potter and R. Wellsted for their past contributions to this subject.