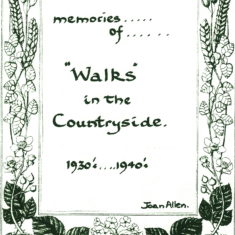 My Parents and brothers approx 1927
By Joan Allen 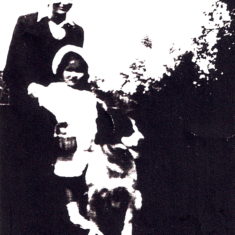 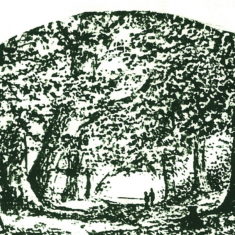 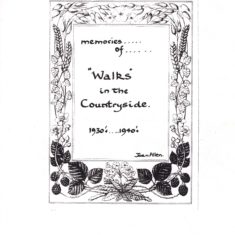 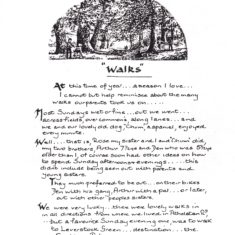 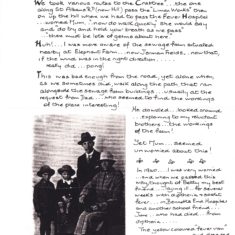 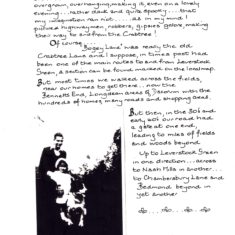 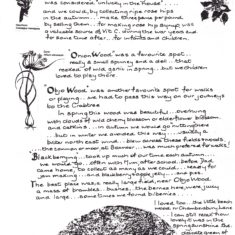 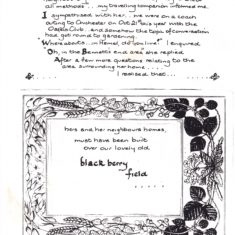 At this time of year…a season I love…I cannot help reminisce about the many walks our parents took us on….
Most Sundays, wet or fine….out we went…across fields, over commons, along lanes…and we and our lovely old dog, “Chum”, a spaniel, enjoyed every minute.
Well….that is, Rose my sister and I and “Chum” did. my two brothers, Arthur 7½ years and Den who was 5½ years older than I, of course soon had other ideas on how to spend Sunday afternoons & evenings….this didn’t include being seen out with parents and young sisters. they much preferred to be out…on their bikes, Den with his gang, Arthur with a pal….or later, out with other people’s sisters.

We were very lucky… there were lovely walks in all directions from where we lived in Athelston Rd,…but a favourite Sunday evening one, was to walk to Leverstock Green….destination….the Crabtree Pub…For some reason my brothers thought this walk, should they be seen… by pals.. to be quite….appropriate…..

Of course, the fact that we usually enjoyed a glass of fizzy lemonade with…if we were lucky a 2d bag of Smiths Crisps… or not so lucky…a penny arrowroot biscuit…simply didn’t come into it.

We took various routes to the “Crabtree”…the one along St.Albans Rd. (now Hill) pass the “Limax Works” then on up the hill where we had to pass the Fever Hospital…worried Mum,,, “now do walk quickly” she would say and “do try and hold your breath as we pass”…”there must be lots of germs about here”.Huh!…I was more aware of the sewage farm situated nearby at Elephant Farm…now Jarman Fields…now that, if the wind was in the right direction…really did…pong!

This was bad enough from the road, yet alone when, as we sometimes did, walk along the path that ran alongside the sewage farm buildings…usually at the request from Dad…who seemed to find the workings of the place interesting! he dawdled…looking around…explaining to my reluctant brothers….the workings of the farm! Yet Mum…seemed unworried about this!

In 1940…I was very worried…when we passed this way, thought of Betty my best friend…..laying ill…for several weeks with diptheria & scarlet fever…. in Bennetts End Hospital and another friend school had died,,,from diptheria…..I liked going by the “Bogey Lane” route, this was a narrow dirt tract….with many pot holes, puddles even in the summer ….the hedges either side were overgrown, overhanging, making it, even on a lovely evening…rather dark and quite spooky…that my imagination ran riot….as in my mind I pictured highwaymen, robbers, gipsies galore, making their way to and from the Crabtree!                                                   Of course….”Bogey Lane”was really the old Crabtree Lane and I suppose, in times past had been one of the main routes to and from Leverstock Green, a section can be found marked on the local map.

But most times we walked across the fields, near our homes to get there…now the Bennetts End, Longdean areas of Dacorum with the hundreds of homes, many roads and shopping areas.

But then, in the30’s and early 40’s our road had a gate at one end, leading to miles of fields and woods beyond.

Up to Leverstock Green in one direction…..across to Nash Mills in another…to Chambersbury Lane and Bedmond beyond in yet another.

…then on a walk in spring…

The hedges would be white with blossom of hawthorn or pink with dog roses.We didn’t pick either…May Blossom was considered “unlucky in the house”….and we could, by collecting ripe rose hips in the autumn… make three pence per pound by selling them…for making rose hip syrup, was a valuable source of Vitamin C. during the war years and for some time after….for infants and children.

“Onion Wood” was a favourite spot….really a small spinney and a dell….that reeked of wild garlic in spring…but we children loved to play there.

The best place was, a really large field, near Objo Wood, a mass of brambles…bushes…the berries here, were juicy and large…sometimes we found bilberries...I loved too..the little beech wood Nr Chambersbury Lane…I can still recall how lovely it was in the spring sunshine the delicate green of the beech leaves…and the smell of the bluebells…and at being “told off” for having muddy shoes…clothes!…….”my garden is full of brambles, whatever I do, I just cannot get rid of them…my neighbours garden’s are the same, they’ve tried all methods”…my travelling companion informed me. I sympathised with her…we were on a coach outing to Chichester on Oct 21st this year with the Oasis Club… and somehow the topic of conversation had got round to gardening.          “Whereabouts….in Hemel, do you live?” I enquired  “Oh, in the  Bennett’s end area” she replied. After a few more questions relating to the area surrounding her home… I realised that….hers and her neighbours homes, must have been built over our lovely old blackberry field…