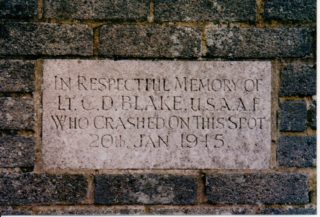 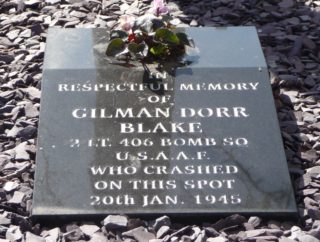 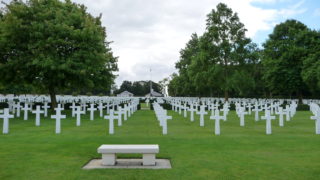 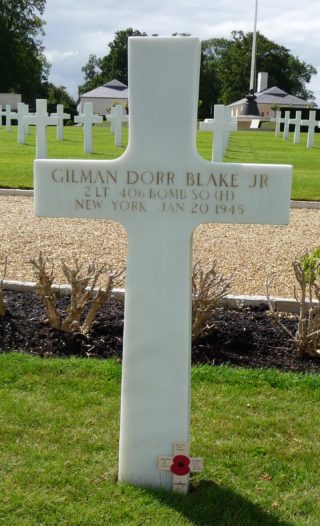 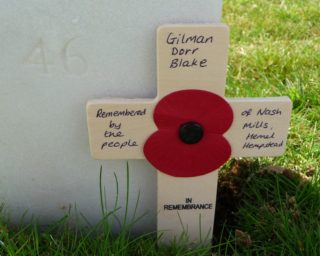 On 20th January 1945, an American plane crashed after being struck by lightning. One of the airmen aboard died in Nash Mills, Hemel Hempstead.

There is a plaque on the wall there which reads:

I have been trying to find out more about this man, who I believe was based at the airfield in Cheddington, and with the help of The American Battle Monuments Commission, I can now confirm his name.

It appears that the engraving on the plaque is not quite correct, in that he was Lt. G. D. Blake, not C. D. Blake. He was Gilman Dorr Blake Jr., Second Lieutenant, U. S. Army Air Forces, Service number O-828100, with the 406th Heavy Bomber (Night Leaflet) Squadron, whose job was to drop propaganda leaflets over enemy occupied territory during the night in the hope of shortening the war.

Gilman Blake entered the service in New York. He was the son of Gilman Dorr Blake, Snr and Antoinette. His father was the Vice-President of the Central Hanover Bank & Trust Co., 70, Broadway, New York and his parents lived at 1111 Park Avenue, New York in 1942.

Gilman Snr and Antoinette appear on a passenger list from 1939 with Gilman Jnr and Richard, their two sons. From this I know that Gilman Snr was born in Rockford, Illinois in 1895 and Antoinette was born in Cumberland, Montana about a year earlier. Gilman Jnr was born in New York in about 1922 and Richard’s birthplace is listed as Long Beach, New Jersey in about 1925. At the time of the passenger list, they were living at 1148, 5th Avenue, New York. They travelled on the S.S. Monarch of Bermuda from Hamilton, Bermuda on 30th March 1939 and they arrived at the Port of New York on 1st April the same year. Gilman Jnr’s age is given as 16, and his plane crashed in January 1945, so he was probably only about 23 when he died.

He married Wynanda Bulkley and they had a son, Gilman Dorr Blake, 3rd. Sadly the baby was born six months after his father died.

A report appeared in the Hertfordshire Hemel Hempstead Gazette and West Herts Advertiser on Friday 26th January 1945, and it says that the plane came down in an electrical storm after appearing to be struck by lightning. It says, “Two airmen bailed out, one landing safely, but the other fell to his death, and was not discovered until three hours later in the grounds of a well-known Saw Mill.”

The saw mill was owned by Arthur East and Son, Timber merchants and Manufacturers. Mr. East wrote to the Blake family and asked to erect a memorial on the site. Originally, it was a placard placed on the ground.

Second Lieutenant Blake was buried at the American Cemetery in Cambridge, England, Plot B, Row 1, Grave 46.

I visited the American Cemetery to pay my respects to Gilman Dorr Blake in August 2014. I am grateful to Arthur Brookes, an associate at the cemetery, who dressed the inscription on the stone with dampened sand brought from Omaha beach in Normandy for this purpose. It makes the inscription stand out and easier to read, but does not damage the stone in any way. As the sand dries out, it simply falls away.

To show that he is still remembered, I left a cross by his grave with the inscription “Gilman Dorr Blake Remembered by the people of Nash Mills, Hemel Hempstead”.

More information about the American Cemetery can be found at the following address:

An obituary of Gilman Dorr Blake can be found here:

In 2013, a memorial garden was created in his memory on the site  where he landed. There is a plaque by a tree in the garden:

Do you know anything more about Gilman Dorr Blake, Jr.?

If you think you can add more information to this story, please add a comment below.