You are here: Home>Towns and Villages>Hemel Hempstead and surrounding villages>Postcards saw romance blossom for photographer 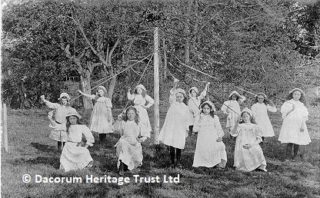 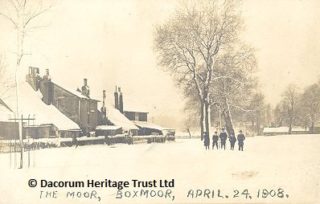 A snowy scene near the old Star Cottages on Blackbirds' Moor, looking towards Wharf Road, on 24 April 1908
Dacorum Heritage Trust 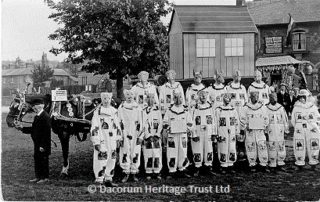 Getting ready for the Hospital Parade on the Moor (opposite the former Baptist Church on London Road). Local people regularly contributed to the West Herts. Hospital and processions were a popular part of their fundraising efforts
Dacorum Heritage Trust 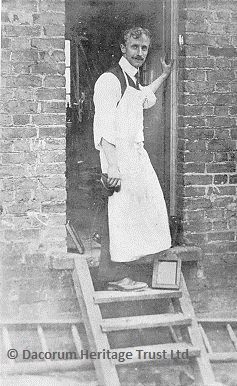 Edward Sammes at the door of his workshop on the corner of Wharf and Kingsland Roads. There is a daylight printing frame on the steps. This photo was taken by his fiancee, Ella Sharp
Dacorum Heritage Trust

Edward Sammes was born in Chipping Ongar, Essex, in 1883.  His parents ran the Wheatsheaf, a beerhouse, in Bovingdon from 1887 and young Edward attended the Church of England School there.  When he became sixteen, he was apprenticed to Robert Joseph Smith, a cabinet maker, of 134 Marlowes, Hemel Hempstead.  His father was charges £20 for this training.  Edward eventually obtained his indentures, but during his five-year apprenticeship, he was not allowed to play at cards, or dice, buy or sell, haunt taverns or playhouses – nor even get married!

His father died suddenly in 1903.  The bereaved family eventually settled at Oxford Villa in St John’s Road, Boxmoor, (opposite Parry’s Newsagents today).  Edward continued working for Mr Smith as a cabinet maker for a further three years and during this time he made contacts with the local gentry which stood him in good stead later.  After a short stay in Kilburn, he returned to Boxmoor in 1907 to work for Fred Gower, ironmonger, of 83 St John’s Road.  The Gower Brothers were well-known local builders, with premises in Sebright Road.

He soon set up on his own account, as a cabinet maker, furniture restorer, upholsterer, and commercial photographer, with a workshop in Wharf Road, which he rented from a Mr J. Loosley.  (Was it Jabez, a shopkeeper, or James a butcher, both with premises in St John’s Road?) His early interest in photography was flourishing and he continued to record the people and events of the district.

Photographers were still fairly rare in the early 1900s.  People would be in no hurry for the completion of an order and they would understand that images did not always ‘take’.  In the Boxmoor area there was another commercial photographer, Mr H. Margrave of Catlin Street, who encouraged the young Edward in this field.

Edward himself had no special premises nor studio, but used the box-room over the front door for day-work and the scullery for developing and printing after the family had gone to bed.  By 1910, he appears to have standardised the production and sale of postcards, with his name on the back.  They would have been taken on a half plate stand or field camera, which he would have transported, together with his tripod, on his bicycle.

Edward met his future wife, Dorothy Ella Sharp, on a seat at the top of Roughdown Common; she lived nearby in The Dell.  In those days, he could use one of his own postcards to write to her and rely on the fact that it would reach her the next day in time for their walk along the canal.  They were married in 1917, at St John’s Church, Boxmoor.  A son, Edward ‘Ted’ Sammes, was born in 1920 in Hendon.  The family moved to 129 Horsecroft Road, (the corner shop), and the commercial photography then seems to have come to an end.  It had been declining as other outlets grew, especially the sale of gramophones and records.

Sadly, in a subsequent move to Hendelayk, (above Boxmoor Station), all his negatives were lost.  Edward and his family returned to Hendon in December 1931.  When he eventually died in 1969, he left behind a legacy of 200 photographs of the Boxmoor area for the period 1898 – 1912.  The people he photographed loved to dress up and they loved their sports, fetes and processions – providing a wonderful social record of the turn of the century, which is now preserved at the Dacorum Heritage Trust’s Museum Store in Berkhamsted.

(Edward Sammes was featured in The Book of Boxmoor by Roger &  Joan Hands and Eve Davis, published in 1989.)