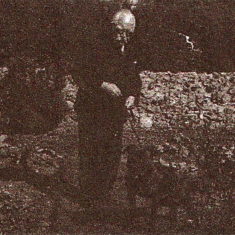 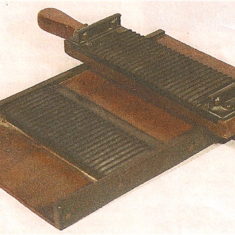 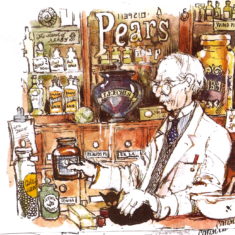 A Chemist's Shop
By Joan Allen 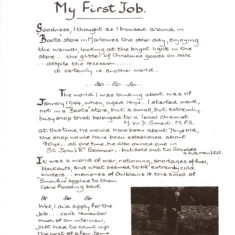 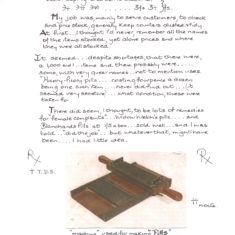 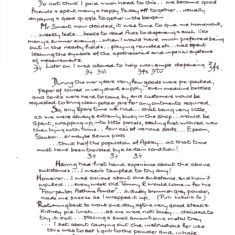 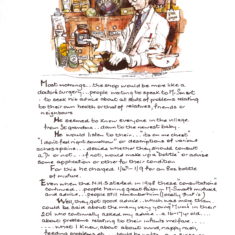 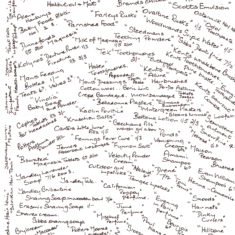 Some of the Items Stocked at Smart Chemist' Shop.
By Joan Allen

Goodness, I thought as I browsed around in “Boots” store in Marlowes the other day, enjoying the warmth, looking at the bright light in the store…the glitter of Christmas goods on sale…despite the recession…it certainly is another world.

The world I was thinking about was of January 1944, when.aged 14 yrs…I started work, not in a “Boots” store, but a small, but extremly busy shop that belonged to the local chemist Mr W.D. Smart. M.P.S. at this time, he would have been about 74 yrs. old, the shop would have been established about 40 yrs… at one time, he also owned one in St.John’s Rd. Boxmoor, but sold out to Shields & Warren Ltd.

It was a world of war, rationing, shortages of fuel, blackouts, and what seemed to be extremly cold winters…memories of Chilblains & the smell of “Snowfire applied to them came flooding back Well, I did apply for the job….can’t remember much of interview, just had to count up the cost of a few items in the shop…write a name or so on some labels … answer a few questions.

Told to start the following Monday, 9AM…my wages would be £1 per week…but increased annually…

I was of course, the junior assistant…the senior one, Vera… being all of 18 yrs. old! She helped Mr Smart, with simple dispensing, with book-keeping and some accounts.

My job was, mainly to serve customers, to check and price  stock, generally keep counters dusted & tidy. At first… I thought i’d never, remember all the names of items stocked, yet alone prices and where they were all stocked.

It seemed…despite shortages, that there were, a 1,000 and 1…items and there probably were…some with very queer names…not to mention uses. “Hicory-Picory” pills…costing four pence a dozen being one such items…never did find out …(it seemed very secretive)…what condition, these were taken for.

There did seem, I thought, to be lots of remedies for “female complaints”…Widow Welch’s pills….and Blanchards Pills at 1 shilling & 5d a box…sold well…and I was told…”did the job”… but whatever that, might have been ….I had little idea.

The prescribed drug would be mixed in a pestle & mortar with a “base” substance to form a sort of paste…this would be placed on above machine…rolled out like pastry and cut into the number of pills prescribed After “drying out”..pills would be varnished or in some case of “gentry patients” maybe, would be silvered.

When…after about 2yrs. or so Vera, married and left & Mavis her young sister started work at the shop…I became…”Senior assistant”…i would have been 16-17yrs. old!! although Mavis & I were much the same age…Mr Smart “said I was to be in charge” and “over” Mavis…and she was to do as I said…Do not think I paid much heed to this…we became good friends & spent many a happy ½ day off together…usually enjoyed a good giggle together in the bargain.

Mr Smart now decided, it was time to give me homework,…weekly tests…books to read Aids to dispensing & such like many a summer evening…when I would have much preferred being out in the nearby fields…playing rounders etc….was spent learning the symbols of the apothecaries and imperial systems of measurements.Later on I was allowed to help with simple dispensing.

During the war years very few goods were pre-packed, paper of course in very short supply, paper bags almost non existent…even medicine bottles and corks were hard to come by and customers would be requested to bring clean pots & jars for any ointments required. So any spare time we had…that being very little, as we were always extremely busy in the shop…would be spent, wrapping up, into little parcels, sealing first with red wax then tying with twine….four oz’s of various salts…Epsom, Glauber…or maybe senna pods,..think half the population of Apsley…at that time must have been troubled by a certain condition!

Having had first hand experience about the above substances ..,I wasn’t tempted to try any! However…I was curious about one substance, and how it worked…every week Tommy R. would come in for his “Fourpen’th Asthma Powder”…a dusty brownish grey powder, made me sneeze as I wrapped it up. (Pulv Lobelia Co). Returning back to work one day, after a very good steak & kidney pie lunch…as we were not busy…. decided to try it out…placing a small amount on a metal tray…I set about carrying out the instructions for use this was to set light to the powder and inhale the fumes from it…as they arose. huh! that wasn’t all, that decided to arise my steak & kidney pie decided to do likewise…I just about made it to the nearest sink!

Most mornings…the shop would be more like a doctors surgery…people waiting to speak to Mr Smart.. to seek his advice about all sorts of problems relating to their own health or that of relatives, friends or neighbours.

He seemed to know everyone in the village, from Gt. grandma…down to the newest baby. he would listen to their …”its on my chest”, “I don’t feel right somehow” or descriptions of various aches & pains…decide whether they should consult a Dr. or not…if not, would make up a “bottle”  or advise some application or other for their condition. For this he charged 1shilling & 4d–1shilling & 9d for an 8oz. bottle of mixture.

Even when the N.H.S. started in 1948 these “consultations” continued…people having great faith in Mr Smart mixtures and advice…people still remember him (locally that is). Well, they got good advice…which was more than could be said about the many very young ‘Mum” in their 20’s who continually asked my advice…a 16-17 yr. old…about problems relating to their infants welfare…what i knew, about wind, nappy rash, feeding problems etc…could be written one sixpence…but I was willing to learn…but had to be “18” first…the local Red Cross said…and pass exams before taking an “infant welfare” course…well all this I did…but all too late…local welfare clinics were opened with the start of the N.H.S.!! …not much call for 20 yr. old “experts”! in chemists shops…