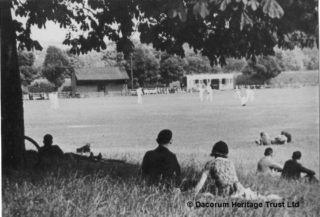 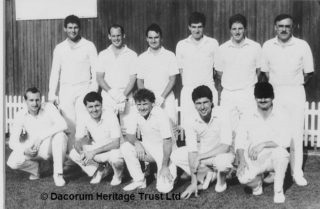 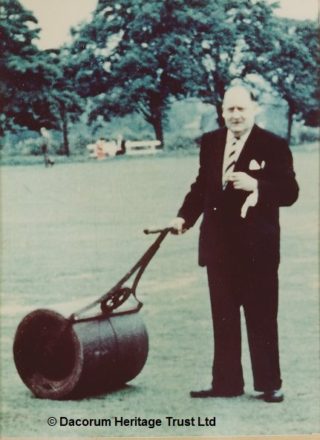 The Town Cricket Club, a familiar sight on its pitch near to Moor End Roundabout, began its long history in 1850.  The ground was prepared in that year and the Box Moor Trustees gave permission for their land to be used for recreational cricket.  They supported the young club by providing labour, as in 1867, when two workmen helped to keep the levels true.  The rent in those early years was only one shilling per annum.

The club could boast notable personages on its committee, such as Sir Astley Paston Cooper of Gadebridge, T. F. Halsey MP, the Vicar of Hemel Hempstead and the High Bailiff, schoolmaster F. St. John Badcock and the wine merchant Henry Balderson.

In 1893 the club won 12 of its 18 matches and the players practised hard, turning out at 6pm every day of the season.  The club relied on subscriptions and, if they did not match expectations, the members were not averse to putting on dramatic entertainments in aid of club funds.

The location of the cricket pitch meant that London clubs could play here, having only a short walk from Boxmoor station.  Heath Park Halt and the nearby Heath Park Hotel must have added to the popularity of playing in Hemel Hempstead before motor transport became the norm.

The pitch was not without its difficulties, however.  People dancing on the field, to the strains of Dickinson’s band, or the Trust’s cattle roaming the grounds, did not help to keep a perfect cricket table.

Once, Percy Christopherson hit a ball that struck an old roadman, but he was happy with the notoriety it brought him – and the half-a-crown (2/6d) compensation.  The Derbyshire player A. E. Lawton came to live in the area and tried to break a window in the Heath Park Hotel.  He never managed it, but he did hit the lock-keeper’s cottage which once stood on the opposite side of the canal.

An article in the News Chronicle in the early part of the 20th century stated “although Hemel Hempstead is a borough, it is to be congratulated in possessing one of the old time village greens on Boxmoor.”

A match between Dunstable and the town was typical of the times.  The Hemel team included a brother of the former Worcestershire player, C. V. Tarbox, as well as local tradesmen: a hat maker, a market gardener, a factory operative and a corn merchant.  One small boy was aggrieved when the ball did not come his way that day, as he got threepence for every ball he fished out of the canal.  A crown of one thousand people watched Hemel win the match, despite T. Payton (brother of Wilfred Payton of Nottinghamshire) taking six wickets for one run.  Tea was served in the adjacent Boxmoor Hall.

The club had its own new pavilion in 1899 and in 1933 a tea room was added a short distance away.  Towards the end of the Second World War, the tea room was adapted to become the main pavilion and the older building became a store.

The store burnt down in 1945.  A new pavilion was built in 1949 and the former tea room was sold to Bovingdon Cricket Club.  In 1963, a newer building was erected which lasted until the present two-storeyed clubhouse was built a little further away from the original site.  Other developments took place during the intervening years.  Today, the club has a proud record and a splendid new centre for social as well as cricketing activities.