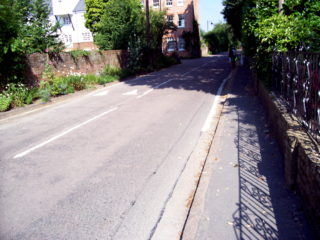 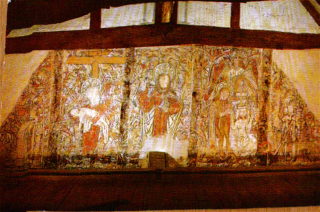 1976 was the year I arrived in Piccotts End Hemel Hempstead. As we were only moving from St. Albans we rallied all the family and friends and moved ourselves. It was quite remarkably hot so we moved and installed the fridge first with a supply of cold drinks for the workers.

The first night in the house is etched on my memory, we decided that as the previous owners had used a downstairs room at the rear of the house as their bedroom they must had good reasons so we did the same. We soon realised that traffic used to roar past the house non-stop during the rush hour-so the back bedroom was best. We had not time to rebuild the bed so plonked the mattress on the floor and more or less collapsed on it. Wide-open windows for air made us realise that something was amiss, somewhere nearby there was a party. Neither of the cottages next to us was occupied neither was the old Windmill pub next to them so the noise had to be coming from the large house on the other side “Greenbanks”.

They shouted laughed and screamed late into the night and sang, “We all live in a Yellow Submarine” until we slept from exhaustion. Later we discovered they had a huge open –air swimming pool with cabin complete with organ and loudspeakers just beyond our gardens. What, we though, had we done? Burnt our boats, mortgaged to the hilt and now this.

I didn’t often walk to the right of our house as the pavement stopped at Dodd’s Lane so if I wanted to go to the small Piccotts End nurseries or garden centre I cut through the mill and ran across the Leighton Buzzard road to get there. The mill no longer ground grain but produced-I think-and sold animal feed, there was a small workshop on the end of the mill near the river where a printer worked. Most customers came in from the main road to park by the large outbuildings, you couldn’t see the outbuildings from the other side where we lived as huge trees surrounded them and a big garden stretched across beyond the wall. Although there was a bus service with a stop outside the house they were very infrequent and still are, so I usually walked to work or shop.

The next occupied house after was the sideways on one next to Lindleys garage. I never did meet any of the people who lived there, but learned to be cautious as the sons of the house would go to the top of the old barn in their garden and take pot shots with rifles or air-rifles across the garden, so I had to check before I lifted my head above the parapet and went to weed the vegetables. Next came Lindleys garage, petrol pumps at the front and large sheds at the back where repairs and M.O.Ts were done.

The mediaeval wall paintings museum and small antiques shop were open at advertised times and A.A. signs directed the traveller.

After the cottages things were much as they are today, many properties are listed so although they changed hands there were few alterations and additions except that the farm across the road had another barn which later burned down-like the mill-mysteriously.

The next person I came to know as a passing acquaintance, was Robin Corbett, my deputy head, who often gave me a lift home used to call in there to arrange the next M.Ps surgery which used to be held in his V.W. camper giving the people in villages a chance to speak to their M.P.

Piccotts End Lane was open to traffic then, there was a car repair/sales yard just before the point where the gate is now and then a more-or-less single-track lane with passing places which brought one out just opposite the shops at Grovehill.

Marchmont Farm on the corner of the lane was a turkey farm producing expensive but very good turkeys, they were noisy birds and rather smelly at times. Marchmont House was just a pub and I think possibly a hotel. I just can’t visualise it now but the road just went on with Gadebridge Lane and Fletcher Way the only turnings right and left. I used to wait for my lift into school outside the, much smaller then, veterinary practice at the top of Alexandra road so I still had some way to go.

The first shop I remember in the High Street was Salter’s, baskets and lots of interesting items for possible presents, then Wagons and over the road the Spinning Wheel restaurant.

There were lots of real shops in the High Street, it was possible to buy meat and vegetables and fish, there was a good ironmongers, a shoe shop, a chemists, car showroom, bakers and paper shop. I bought things from all these either as I walked past or in separate shopping expedition in the holidays; it was worth going there to shop then. On the right hand side of the road there was a good dress shop and Dinky Dell a Fancy shop, knitting wools and craft items, toys and all sorts of goods. Further down, past the little car park was an interesting “ all sorts of things” shop, mostly gift type things. Behind the shop there was a model car and plane importing business, about where Cranston’s used to be I should think, which supplied the High Street model shop and did mail order.

A shop further up sold white goods and there were many other shops that I have forgotten. There was also a lovely old pub-the Kings Arms I think which was knocked down and replaced by a red-brick monstrosity, judging by the effort involved in destroying it I think it was good for a few more years. A shop selling fireplaces and accessories was right on the end of the parade.

Up Alexandra road, the Doctors on the right, the Shoe repairers on the left, Solicitors further on, then all houses up to the vets.

When not at work I would take a bus to the bus station and walk round the town. Lots of shops no pedestrianisation, shops all along where the Marlowes centre is now and a very good Chinese restaurant too.