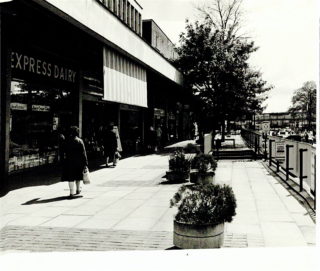 We moved to Hemel Hempstead from Wembley in July 1971. As it was towards the middle of July the two children did not go to school until the new term in September.

My son was 13, so I had a bit of time to sort out a school. Not knowing the area I went to the Town Hall and they suggested Grove Hill School as my son’s year was the last year of Grammar School, as he had attended Grammar School in Wembley. As Jill had said earlier there was no catchment area in those days. My daughter aged 9 went to Broadfield School.

We moved into a new house in Caernarvon Close, which was formerly railway land, as we found out when trying to sort the garden out. It was jokingly called “Chalk Hill” by the neighbours.

The day we moved in the builders were still cleaning and clearing up. We arrived and that was the last we saw of them.

The roads of the Estate were named after events, which happened in 1969 when it was being planned. Mayflower Avenue after the similar voyage by the original Mayflower to America. Caernarvon Close after Prince Charles investiture at Caernarvon Castle and Concorde Drive after the supersonic airliner’s maiden flight.

It was 2/3 months before the roads were made up properly, and after my son had been at his new for a couple of days, he broke his collar bone doing “Wheelies” on his bicycle at the end of the road.

Changes, which I remember, are: Kodak building wasn’t there, Marks and Spencer was next to Woolworths and the Express Dairy was on the “ramp”. As was a wonderful Ironmongers. Midland road was “straightened” above Keens field and the pub was called “The Mayflower”.

Before moving we would come to Hemel Hempstead to visit relatives and the children would take their fishing nets to the river in Gadebridge Park. Then we thought it was quite countrified.