You are here: Home>Towns and Villages>Berkhamsted>Get the message: telegrams and telephones

Get the message: telegrams and telephones 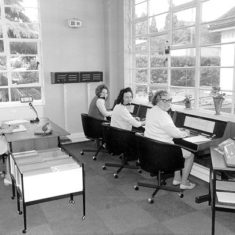 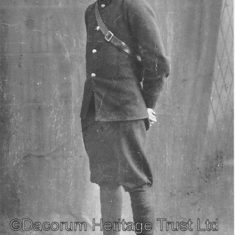 Photograph of Bob Gravestock, who worked as a telegram boy, circa 1900's. Note his uniform, which includes a pouch to hold the telegrams
Dacorum Heritage Trust 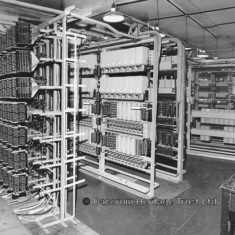 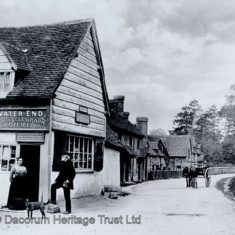 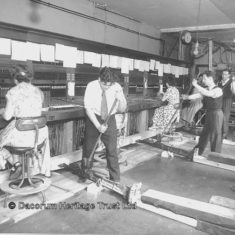 The installation of an automatic telephone exchange at John Dickinson's. The staff continue to work as the manual board is removed
Dacorum Heritage Trust 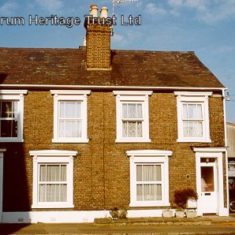 In 1898 the National Telephone Company began to carry out the necessary work to connect Berkhamsted to the national telephone system. (The first telephone exchange was in the front room of a house in Chapel Street. The news of the Armistice was received here in 1918 and the first person the operator told was a solider on leave from France who happened to be in the office at the time. As a youngster, the historian Percy Birtchnell would peer thorough the lace curtains to see the operator at work. He recalled that, as a schoolboy seeing the operator working at the switchboard, it was like science fiction come true
Berkhamsted Local History and Museum Society cared for by the Dacorum Heritage Trust

Since Alexander Graham Bell invented the telephone in 1876, it has become a necessity of everyday life. Prior to an area becoming connected to the telephone system, it was necessary to have a guaranteed number of residents wishing to subscribe. In 1901, Hemel Hempstead Town Council were informed by the Post Office that they would open an exchange to be connected with the country’s branch system, if 20 telephone subscribers would come forward. Only 51 years later the number of subscribers had increased to thousands.

In 1952 a new telephone exchange opened to handle the thousands of extra telephone lines needed by the growing New Town areas. The previous exchange handled only 1,600 subscribers, whilst the new facility was equipped to deal with 4,000 telephone lines. There was already a list of 380 people eagerly waiting to be connected to the system. The Mayor of Hemel Hempstead, Herbert Christopher, opened the new exchange on Lamsey Road and remarked, “We would be almost lost today without the telephone network”. He was however, rather surprised to discover that telephone operators could listen in to the conversations, as it was a manual exchange, rather than the more modern automatic version.

Telephone history is extremely fast moving, from the 20 subscribers needed in Hemel Hempstead in 1901 to the capability to handle 4,000 lines only 51 years later.

Telephone boxes are also becoming a thing of the past. A telephone box was first installed in Flamstead in 1936, yet it is now quite a rare sight to see a bright red telephone box. Indeed, the telephone box outside Sharlowes Farmhouse in Flaunden is protected as a listed structure. In this age of the ever present mobile phone, the telephone boxes often stand deserted, a reminder of another time, when it was not necessary to be constantly ‘in touch’. With the advent of text messages, )a cheaper alternative to a mobile phone call), and email, (which uses the telephone line), we seem to have come full circle back to the original text message – the telegram.

Telecommunications are a means of sending signals and messages over long distances using electronic equipment. Simple methods of sending and receiving messages such as semaphore (using flags) and heliographs (the use of reflected sun light) rely on both the sender and the receiver being close enough to see the signals. Telegraphs and telephones allowed messages to be conveyed without the need to actually see the signal.

The electric telegraph was invented in 1873 by William Cooke and Charles Wheatstone, which allowed messages to be sent by electricity and then written or printed out at the receiving end. The Great Western Railway installed the system a year later, which was instrumental in catching John Tawell, a chemist from Berkhamsted, who was the first murderer to be caught by the aid of the electric telegraph. In 1845 he was arrested and found guilty of the murder of Sarah Hart from Slough.

Tawell raised suspicions as he left Hart’s house and he was seen boarding a London-bound train. A telegraph was sent to London, detailing the recent murder, along with a description of Tawell and which compartment he was sitting in. The resulting telegram alerted the police in London, who observed Tawell before arresting him, once full details of the murder had arrived from Slough. Tawell was wearing Quaker clothing, but the telegraph code did not have a letter Q and so the spelling used in the message was ‘KWAKER’.

Berkhamsted received postal telegraph facilities in 1870. Towards the end of the preceding year a letter had been sent to the Postmaster General with the estimated cost of making the necessary alterations to accommodate the handling of telegraphs. The letter stated that an annual allowance of £5 would be made to the Postmaster for “providing adequate accommodation for the telegraph”. The new facilities were well used and the Postmaster received a commendation during the first year of operation in recognition of “his energetic conduct in repairing the damage which was done to the Telegraph wires by a large tree which had fallen across them”.