You are here: Home>Towns and Villages>Berkhamsted>Snappers who could count Queen Victoria among fans

Snappers who could count Queen Victoria among fans 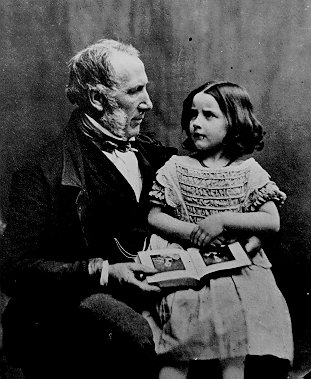 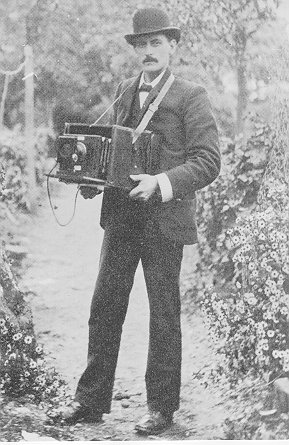 J.T.Newman (1860-1937) with an early portable camera, circa 1890.
Berkhamsted Local History and Museum Society cared for by the Dacorum Heritage Trust 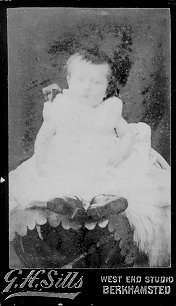 Carte-de-visite of an unknown baby taken by GH Sills of Berkhamsted.
The Dacorum Heritage Trust

William Claridge (1797-1876) was a good amateur artist and lifelong resident of Berkhamsted.  He lived at 32 High Street; this was almost opposite the then Black Horse public house.  It appears that he was a man of property, the 1851 and 1861 censuses describing him as a ‘proprietor of houses’.  Clearly this security gave him the time to pursue his parallel hobbies of painting and photography.

It was recalled by Henry Nash that on the occasion of Queen Victoria and Prince Albert passing through the town in 1841, on their way to visit the Duke of Bedford, “the decorations…were very elaborate and displayed great artistic ability.  It was before the days of photography; most excellent drawings were made of them by Messrs. Claridge and Buckingham; these were lithographed and copies are still to be seen in the possession of some of the old inhabitants.”

More importantly, Claridge left us with a set of images reflecting life in the latter half of the 19th century (e.g. Old Betty, a gypsy, Dick Ghost, gravedigger, William de Fraine, barber and Brackley, a gardener at Haresfoot.  When he began photographing the locality c. 1855 or even earlier, Berkhamsted was still a small valley town with a population of less than 3,500, most of which lived in Castle Street or its immediate environs.  There was little or no housing on the southern side of town.  By the late 1860s, many material changes were taking place, with the construction of the Town Hall, several churches and many more houses.

James Thomas Newman (1860-1937) The Newman family lived at Pear Tree Cottage in Wilstone.  James showed no interest in the family’s wheelwright business and all his spare time was spent touring the countryside with a large camera strapped to his bicycle.  He trained for the profession with Piggot’s in Leighton Buzzard and settled in Berkhamsted in 1888.  He became the manager for Pigott’s three photographic studios and on his employer’s death, Newman took over the business in Berkhamsted.  He later transferred it to Dean Incent’s half-timbered house in the High Street.

Newman was regularly employed to take photographs at all the great houses in the area, including Tring Park with Lord Rothschild.  He recorded every event, whether important or not, in town and countryside, with illustrations appearing in national magazines.

During the First World War he was made official photographer for the Inns of Court O. T. C. based in Berkhamsted, continually taking records of their activities.  He was affectionately known as ‘our indefatigable photographer’, braving all weather conditions and on one occasion arriving with his customary camera and bicycle at the top of Ivinghoe Beacon in deep snow!

“Nothing pleased him more than to study wildlife and spend many happy hours with his children (and camera) in the woods and commons, making a concealed hide to get bird photographs; these were duly published in Hutchinson’s and Cassell’s wildlife books and magazines”, according to his obituary in the Berkhamsted Gazette.

George Henry Sills (1870-1951), although a contemporary of Newman’s, is perhaps the least known of the three photographers.  Nevertheless, he had a successful business and counted royalty and members of the landed gentry among his clientele.

Sills’ first order came about in a curious way.  Queen Victoria sent boxes of chocolates to British soldiers serving in South Africa, one of which was sent home to Berkhamsted as a souvenir, stitched inside a tunic pocket.  The soldier’s father asked Sills to photograph it and then he sent a print to the Queen, who subsequently ordered more prints, along with the much-travelled box of chocolates.  She then returned the box with a letter of thanks to the family.

Edward VII also ordered prints from Sills, this time an enlargement of the ‘Royal’ oak tree planted by Queen Victoria at Ashridge when she was a child.  Lord and Lady Brownlow saw the image and ordered one for themselves.  Sills also sent his photo of the Gamma airship landing at Berkhamsted Castle to George V, continuing the royal patronage of his work.

George Sills was born in Berkhamsted , the son of a railway porter, Stephen Thomas Sills and his wife Emma, who lived in the High Street.  He attended the National School at the Court House and was a member of St Peter’s choir and a Sunday-school teacher for 17 years.  He married Amelia Ledger of Sevenoaks and they celebrated their Golden Wedding in 1940.  He died, aged 82, at West Herts. Hospital, bringing an end to these brief stories of those pioneering early Berkhamsted photographers.