You are here: Home>Towns and Villages>Berkhamsted>The rise and fall of Coopers

The rise and fall of Coopers 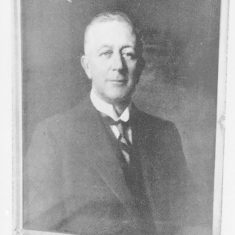 Richard Ashmole Cooper. He was instrumental in setting up the Cooper Research Laboratory. The foundation of this pesticide business was incorporated into Plant Protection Ltd in 1937, a company owned jointly by C.M.R and C.M.I
Berkhamsted Local History and Museum Society cared for by The Dacorum Heritage Trust Ltd 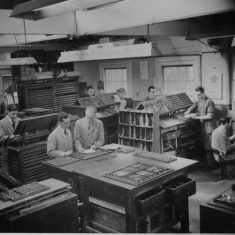 The composing Room of Clunbury Press, 1951
Berkhamsted Local History and Museum Society cared for by The Dacorum Heritage Trust Ltd 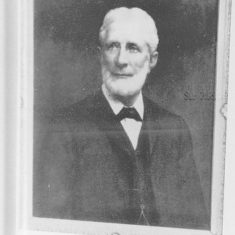 Sir Richard Powell Cooper (1818-1913) was also a great pioneer in the export of pedigree cattle and sheep. He was awarded the Baronetcy in 1905 by King Edward VII
Berkhamsted Local History and Museum Society cared for by The Dacorum Heritage Trust Ltd 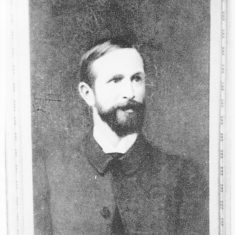 Herbert Henry Cooper (1850-1891) had been a solicitor of the supreme court prior to joining Cooper's. Unfortunately, he suffered from a lung disorder and partial paralysis of the right arm and when he died, had only completed 11 years with the firm
Berkhamsted Local History and Museum Society cared for by The Dacorum Heritage Trust Ltd

In the 1880’s “Lower Works” was built at the eastern end of the High Street.

The company continued to expand after the death of William Cooper. Its travelling salesmen ensured that the powdered dip was now exported throughout the world.

In 1898, his eldest son, Richard Powell Cooper’s son Richard Ashmole Cooper became partner. One of his first acts was to encourage the installation of a revolutionary machine for wrapping and weighing the packets of dip. He was also instrumental in setting up the Cooper Research Laboratory in the office building in Ravens Lane. He took over the business following his father’s death in 1913 whilst also serving as a Member of Parliament.

By 1925, due to poor health and an uncertain future he combined forces with Isaac McDougall, Chairman of McDougall and Robertson Ltd and amalgamated the two businesses. The new company thus formed was to be known as Cooper McDougall Robertson with Richard Ashmole Cooper as Chairman and Alex Robertson as Managing Director.

In 1939, the activities of the Cooper Technical Bureau (situated in Russell Square in London) founded by Richard Ashmole Cooper after the 1914-18 war, were transferred to a new purpose built building in Berkhamsted High Street close to the company’s Lower Works, where the staff concentrated in chemical research and entolology

During the Second World War, Cooper, McDougall and Robertson produced Anti-Louse Powder –AL63. The louse had been responsible for the deaths of many men during the First World War as it caused trench fever and typhus. The remedy had to process protective as well as killing properties and it was decided it should take the form of powder so it could be dusted into clothing. Over 100 different preparations were tried. The one chosen was the 63rd, hence the name. The active ingredient in AL63 was DDT and was used by many local people as a pesticide on their gardens and allotments.

1943 was the year that the company intended to celebrate its centenary, but as it was wartime, celebrations were kept to a minimum, a party of sorts was held for the workforce in the castle grounds where an illuminated address was presented to Sir Richard. It also  intended to produce an official history of the company, and drafts of two versions were prepared but wartime restrictions on paper prevented this from happening.

It was also during the Second World War that new synthetic insecticides appeared on the market. As a result, the days of the old Cooper’s powder dip were numbered and production in the town finally ended in 1952 after a continual production on site, for more than a hundred years. Production was transferred to Kelvindale in Glasgow, but its popularity was in decline due to its high toxicity it was soon to be destined to posterity.