You are here: Home>Towns and Villages>Kings Langley>Needlework shows girls in training to be young ladies

Needlework shows girls in training to be young ladies 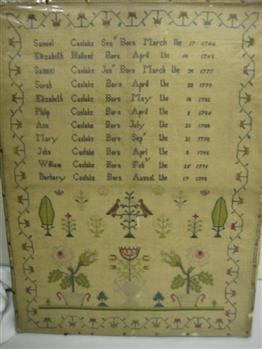 The Caslake family sampler shows a list of names along with their dates of birth. The eldest was born in 1744 and the youngest child in 1798. This sampler was probably made to celebrate the birth of each child and perhaps become a family heirloom
Kings Langley Local History and Museum Society cared for by the Dacorum Heritage Trust 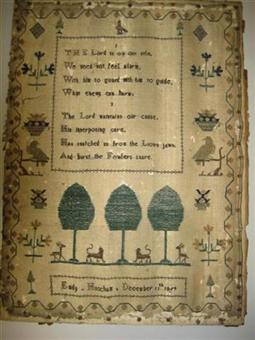 Emily Huxham's sampler has her name, age and date (11 December 1910) stitched at the bottom -the embroiderer was 11years old in 1835. There are two seated deer (or harts) stitched into the design, which tells us that it was made in Hertfordshire. This sampler contains examples of early naturally-dyed wool, used to create animals, royal emblems and a patterned border. The simple material tells us that the girl was not from the wealthy 'upper class'. Expensive materials such as silk or satin would have indicated a different strata of society
Kings Langley Local History and Museum Society cared for by the Dacorum Heritage Trust

The Dacorum Heritage Trust worked with two local schools on a cross-curricular history, art and design project in the winter term of 2010, using the Trust’s collection of samplers. The main aim of this project was for the pupils to learn what life was like for children in the Victorian period.  In an introductory workshop, pupils learnt why samplers were made and the significance of the design.  They also thought about the importance of conserving objects for the future.  They could then design and embroider their own samplers, taking inspiration from examples in the Trust’s Collection.

Samplers date back to the 15th century and were used as a way of practising the needlework necessary in decorating items such as clothing, tapestries, fire-screens, table and bed linen in the home.  Children’s education was based around skills that they would use in care of the home and family or, if they were wealthy enough, to prepare them to be young ladies.  Depending on the girl’s status in society, a typical female education may have included literature, music, French and household management, although it must be said that these subjects varied.  Girls from all backgrounds practised their needlework and for this there was no better example than the sampler.  In some cases, the high level of skills obtained in this activity provided a girl with the opportunity for domestic work or as a seamstress.  In the Board schools, the local female gentry would go into the classrooms to examine the needlework, perhaps to give the most promising pupils a chance to earn some money or even gain full-time employment.

It is important that children today understand the progression of women’s education.  Objects such as these samplers gave the pupils involved in the project an appreciation of the conditions of education for a 19th century girl, so very different from those of today!

The Trust was successful in obtaining the assistance from AIM (Association of Independent Museums) to conserve and mount four of the earliest and most detailed samplers. In the 19th century sampler making became more formal and was used in schools to teach literacy and numeracy.  It was thought that stitching the letters would help pupils to recognise and sequence the alphabet and learn their numbers.

The conserved Victorian samplers were used as an inspiration for the children’s own designs, as well as to teach simple embroidery techniques. As a contrast, the pupils were also encouraged to create contemporary designs reflecting their own lives.  After designing their samplers on squared paper, they used cross-stitch to transfer their designs onto canvas.

The teachers felt that the samplers enabled the children to look at the past through a child’s eyes and it gave them a strong sense of achievement, after having worked carefully through each step of the process.

The pupils were pleased with the results and, hopefully, certain aspects of Victorian life had become more meaningful to a young generation.