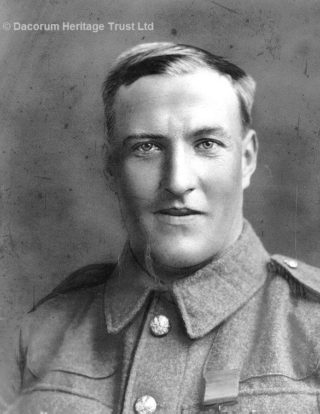 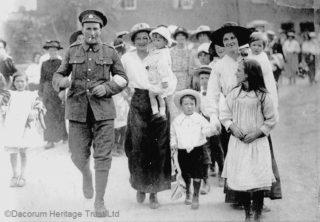 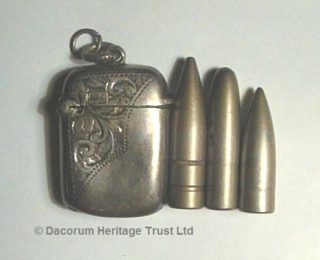 On Christmas Day 1889, a boy was born in Kings Langley who was destined to become a National Hero, and part of the village’s heritage. Christopher Augustus Cox, the youngest of five children of William and Susannah Cox was barely six weeks old when his father died of influenza. Chris had a tough, God-fearing, upbringing exemplified by his winning the local school prize for Religious Knowledge three years in a row. These values were to remain with him throughout his life. Leaving school at 12 he worked on a local farm until responding to Kitchener’s call to fight for King and Country soon after the outbreak of War in 1914.

On 5 October 1912, Christopher married Maud Swan from Watford and the following July their first son, Christopher William was born. They went on to have seven more children – all of whom became central to their lives as a true family. WWI however was to cause a huge disruption to family lives through the country and Chris was to count himself blessed to survive the ordeal and return to working on a local farm once hostilities were over. Farming was not to be his only work, for the Ovaltine Factory was expanding rapidly – using the produce from the land to promote healthy growth to a nation struggling to recover from the Great War. Chris joined the company and was to give 32 years of loyal service to them before an accident at work brought his working life to an end.

Christopher Augustus Cox responded to the “Call to Arms” and found himself assigned to the 7th (Service) Battalion of the Bedfordshire Regiment as No. 13909 Pte. C A Cox – stretcher-bearer.

His first experience of trench life was August 1915 and, by the end of year he had completed six turns on the front line. 1916 saw the battle of the Somme and the “Bedfords” were in the thick of it. In July, Cox was hit in the thigh by a sniper’s bullet and spent the next six weeks away from the Front in hospital. By late September he was back in the front line to endure the terrible conditions there. In October he heard of the deaths of this mother, Susannah, and his older brother James, killed in action fighting with the Australian Army in Europe.

By March 1917, the Front had advanced to the Loupart Line and the Bedfords were ordered to Aichet Le Grande. Three days of fighting under heavy German fire saw Chris in almost continuous action. Witness accounts from officers and men from his own and other companies spoke of heroism “Saving many lives that day by risking his own” – testaments which were to see him recommended for the Victoria Cross. In 1917, Private Cox was awarded the Victoria Cross “for the most conspicuous gallantry and continuous devotion to duty when acting as a Stretcher Bearer during the operation against Achiet-le-Grand on 15th March. The citation reads: “Private Cox, with absolute disregard for his own personal safety, went out into the open over absolutely fire-swept ground and single-handed rescued four men. Having collected all the wounded of his own battalion, he assisted in bringing in the wounded of the neighbouring battalion.

“Lt. RJ Clarke wrote: “Heedless of the fire Private Cox went from shell hole to shell hole and bound the wounded up and after he had finished them started back with another man, with the most severe case. For the first 200 yards he was under MG fire, but without hesitating once he completed his journey and I saw him come back for a second load a few hours later.”

The award ceremony at Buckingham Palace on 21 July 1917 was a proud moment for Chris and his family. Although he had been injured in his foot and leg, he was able to receive the award personally from King George V and later, after release from the convalescent hospital, return home to a special reception at Kings Langley on 28 July 1917.

Receipt of the honour carried with it many subsequent invitations – to garden parties at Buckingham Palace, dinner at the House of Lords, Coronation celebrations for both King George VI and Queen Elizabeth II, and Victory celebrations at the end of WWII. He was also in demand at local events, planting a tree on Kings Langley Common and attending the annual Remembrance Day parades each November.

After the war, Cox worked in the Ovaltine Factory for many years.Christopher died on 28 April 1959 at the age of 69 and his passing was mourned by many. A man who truly lived an honest God fearing life, putting others before himself at all times, none more so than when rescuing injured comrades in the field of battle.