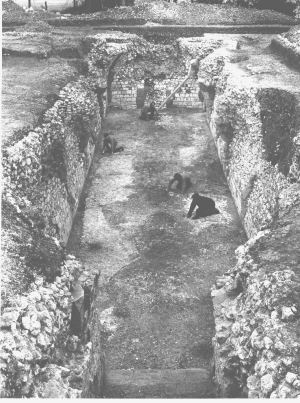 Photograph of the excavation of the cellar at Kings Langley Royal Palace, 1970
Dacorum Borough Council Archaeology cared for by Dacorum Heritage Trust

In 1276, Eleanor of Castile, the wife of King Edward I used part of Langley as a hunting park and under her supervision a magnificent palace was constructed. Later in 1308, under the patronage of Edward II, an important Dominican friary was established just to the north of the palace.

During the Black Death of 1349 Edward III used the Royal Palace as the Seat of Government. His fourth son, Edmund (the first) Duke of York was born there and Richard II (1379) grew up at the palace and was very attached to it. Richard was initially buried there following his assassination but later his body was moved to Westminster Abbey.

Following a fire in 1431, the palace fell into decay and most of the royal estate was sold off in the 17th century. None of the Palace survives today above ground level. Part of the site, now occupied by the Rudolf Steiner School, was excavated in 1970 and again in 1974-76. An impressive wine cellar discovered and also a building containing the principal apartments called ‘le Longrewe’.