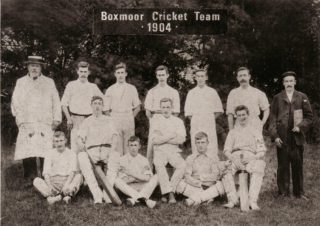 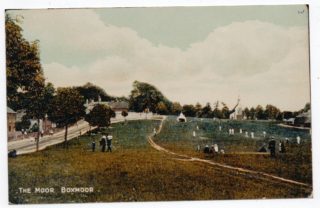 1. The small marquee on Blackbirds' Moor was the 'pavilion' in the early days of Boxmoor Cricket Club, founded in 1857.
Boxmoor Collection

Over 150 years ago, the Box Moor Trust allowed a piece of ground to be enclosed with posts and rails for the purpose of cricket.  That was in 1857 and the Boxmoor Cricket Club has been playing on Blackbirds’ Moor ever since then.  In fact, the ground, still leased from the Trust, is referred to as the ‘Boxmoor Oval’.

The game of cricket began in Elizabethan times and the first recorded match involving Hertfordshire was in Epping Forest in July 1732.  Gambling was rife in those days and substantial sums of money were at stake on the outcome of the game.  There were a few general rules, but boundaries and under-arm bowling were unheard of, the bat was curved and the players wore their everyday clothes without protection.

A pitch was actually used on the Moor opposite the railway station prior to 1857, when the players used to wear high black hats and bowling was always underarm.  However, the first recorded local match took place on 20 August 1833.  “It was played with great spirits, activity and science, connected with familiarity and good conduct, and concluding with an excellent supper, good harmony and friendship at the Red Lion.”  The result was a resounding win by Hemel Hempstead.

The pitch needed to be improved regularly and the Trust helped where they could.  Coaches were used for away games from 1929 and matches were organised with local teams such as Abbotts Langley, Gorhambury and Kings Langley.  Meetings were held at the Railway Tavern, next to the Station on London Road.

The Second World War took its toll on the number of men available to play and older players had to be approached; the club sent gifts to their former young players who had enlisted.  One of these older men, B. Carpenter, was made a life member in 1947.

However, the end of the war and the development of the New Town saw an influx of players and the club revived.  The Commission for New Towns also provided a path separating the pitch from St John’s Road.

A small tent served as a pavilion for many years until, in 1961, Mr Selden was given the go-ahead to lay the foundations for a building.  It was estimated to cost £625 and was to have a main room, kitchen, two dressing rooms and a store room.  The Gazette Cup was presented in 1962 and a Ground Committee was formed.  The club had a new cap in 1964, in royal blue and gold.

This pavilion was gutted by fire in October 1981, apparently started by thoughtless vandals.  The club’s President, Len Hopkins and Chairman, Maurice Wigmore, applied to the Trust for permission to replace the burnt-out shell with a new brick building.  It was designed by Julia Lowe, the first female Box Moor Trustee.

The original wicket had been at right angles to the main road, but nearby residents often complained that it was too close to their properties.  The Trust supplied some labour to help with changing the cricket table.

Nowadays, league cricket is played on the ‘Oval’  and other activities help to supplement the club’s income.  The match ball for league games is sponsored by local businesses, as well as individuals.  Sunday cricket is now allowed and teams take to the field over most Summer weekends.  There have been further extensions and a score box added, as well as practice nets.  There is no greater way to relax on a sunny afternoon than to sit and listen to the sound of ball on willow and lazily watch the men in white take part in that great traditional game of cricket.

The Club celebrated 150 years in 2007 and currently has about 50 playing members which field three teams on Saturdays in the Saracens Hertfordshire Cricket League.  There is an active junior section with over 80 youngsters playing under the supervision of qualified coaches.  The Club aims to prioritise junior development in the future.