The Sebrights of Beechwood Park 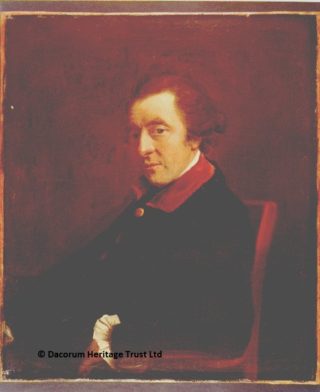 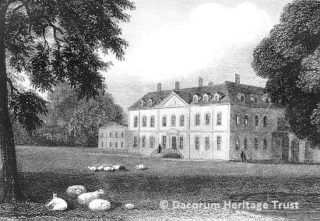 Beechwood Park,near Markyate, is one of Dacorum’s finest country houses. Now an independent school, it was once the home of the Saunders Sebright family. During the 18th and 19th centuries, their story reflected their role in a wealthy and influential social life.

Beechwood Park lies on the ancient site of the Nunnery of St Giles in the Wood, founded c.1120. After its closure in 1537, the property passed through several hands until acquired in 1628 by Thomas Saunders of Long Marston. His great grand-daughter, Anne, married Sir Edward Sebright, the 3rd Baronet, of Besford in Worcestershire, establishing a family connection for the next two and a half centuries.

One of six children, only Anne herself survived childhood. A monument in St Leonard’s Church, Flamstead, is a poignant memorial (attributed to William Stanton, c.1690) to the early death of her brothers and sisters.

The Saunders family had already set about enlarging Beechwood, but it was Anne and Edward who created the imposing main façade, This work was completed in 1702. However Edward died soon afterwards and was not able to reap the reward of his work. He was taken back to Worcestershire and is buried at St Peters, Besford, rather than at Flamstead.

The Sebrights had estates in Worcestershire before they acquired Beechwood Park, The family held the manor of Besford for three centuries but, after they chose Beechwood as their main home, it was generally occupied by various stewards.

A William Sebright purchased Besford in 1606 and Battenhall, now a suburb of Worcestershire, in 1614. It was his nephew, also Edward, who succeeded to the estate and who became the 1st baronet in 1626. He was a Royalist during the Civil War, raised a troop of horse for Charles I and was fined £1,200 for supporting the King.

In Worcestershire, the main estates were at Besford, Battenhall and also Wolverley, near Kidderminster. Besford was described by Habindgon as ‘a manor enriched with fair desmesnes and a parck of pleasure’. Its earliest timber-framed range dates from c1500.

The parish church of Besford, the only completely, timber-framed church in Worcestershire, retains a number of memorials to the Sebright family. Besford Court was sold by Sir John Gage Saunders Sebright in 1885 and, after a further sale in 1910, it became a Catholic school.