You are here: Home>Towns and Villages>Bovingdon>Airfield was a second home for US Pilots during the war

Airfield was a second home for US Pilots during the war 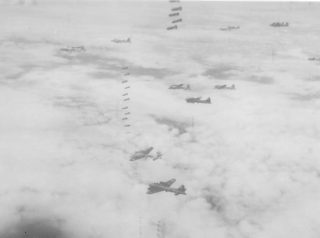 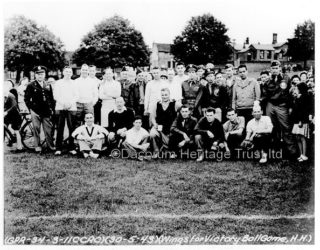 USAAF Bovingdon softball match at Boxmoor Cricket ground, May 1943. Locals and Americans alike were briefed as to the peculiar habits of each other. There were a number of local girls who became GI Brides and emigrated at the end of the war
Dacorum Heritage Trust

Bovingdon Airfield was built in 1941-2 as a bomber airfield for the Royal Air Force (RAF). The 8th US Airforce (92nd Bomber Group) arrived there in 1942 and was assigned the role of a B17 combat Crew Replacement Unit (CCRC). Combat Crews of other bomber units arriving in Britain during the next two years received theatre indoctrination at the station.

In September 1944, the CCRC was disbanded, the airfield became the base for the European Air Transport Service and many thousands of GI’s returned to the States via Bovingdon’s Air Terminal. Control reverted to the RAF on 15 April 1946. The Americans returned to the Airfield on 25th May 1951 in the form of the 7531st Air Base Squadron operating side-by-side with the RAF and Foreign Service Organisations.

The 7531st departed in 1962 and in 1968 the Ministry of Defence announced that Bovingdon was one of several airfields due for closure. All that remains today is the derelict Air Traffic Control, as HM Prison the Mount now occupies a large part of the Site.