You are here: Home>Towns and Villages>Hemel Hempstead and surrounding villages>Villages surrounding Hemel>Boxmoor>The 120-year-old golf club that started life on a train 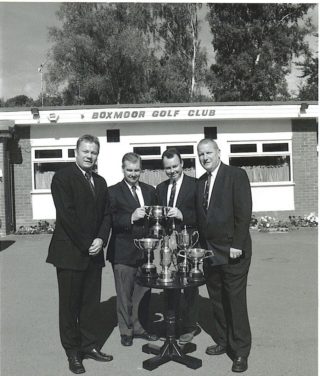 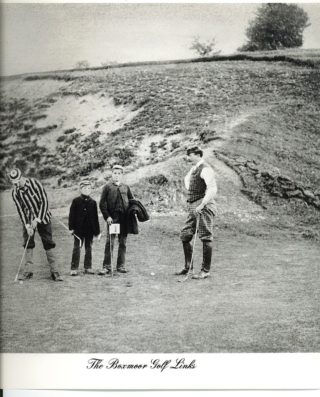 Boxmor Golf Links in the early 1900s. J B Wildman was the first known captain of the club
Roger and Joan Hands 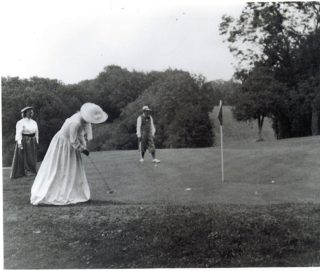 Boxmoor Golf Club's Centenary celebrations in 1990 included a special event in period costume. The Ladysmith Gold Medal, introduced to mark the Relief of Ladysmith in 1900, during the Boer War, unfortunately has long since disappeared
Roger and Joan Hands

The scenically hilly Boxmoor Golf Club claims to be one of the oldest links courses in the county.  It was inaugurated in August 1890, following a meeting of local businessmen on their train to London.  They often met up in a first-class carriage and shared the enthusiasm which the exploits of John Ball, of the Royal Liverpool Golf Club, aroused in them.  He was the first Englishman to succeed in the Open Championship since its inception in 1860.  The businessmen bemoaned the fact that there were so few good English courses for there to be any consistent chance of beating the Scots at their national game.

The train ride took them through the Box Moor Trust lands and it was not long before they sought permission to cut their own holes on Sheethanger Common.  A letter was drafted to the Trust and recorded at a meeting at Boxmoor Hall on 13 August, signed by Messrs. Frank Cornwell, R. N. Byass, John F. Courtney, A. R. C. Richings, Thomas Christopher, Sam Oxenham and J. H. Clayton.  The intended new golf club would be pleased to pay £5 a year for the privilege of playing on Sheethanger.  The request was granted, for one season, as a trial run.

The first meeting was held at Boxmoor Railway Station, (as it was then called), when rules were agreed and the first members elected.  Further committee meetings were held aboard the 6pm train from Euston, no doubt much to other passengers’ surprise.  It was decided not to play on Sundays and the nine-hole course was duly laid out.  By December 1890, there were 30 members and the annual subscription was four guineas.

Caddies and other staff were employed, competitions organised and the club seemed all set for a successful beginning.  The first wooden club house was erected on land belonging to Dudley H. Ryder of Westbrook Hay, in Box Lane, near where the club house stands today.

In 1895, Lord Walter Rothschild, of the wealthy banking family and originator of the Natural History Museum in Tring, became a member for 12 years.  Caddies were an important part of the scene from the early days.  The ‘boys’ wore special badges and caps and were paid fourpence a round.  By 1900, a caddy master was employed for the season at a cost of 7s 6d – a reasonable sum in those days.

The fact that they played on open common land did have some repercussions over the years.  Sheep were grazed at that time, also during the Second World War; lambs sometimes suffered injury by golf balls, but farmers were compensated.  Ponies had to pull a water cart to refresh the greens, as there was no running water.

Women were allowed to join the club from 1892 but had to let ‘gentlemen’ pass them!  The course has its own challenges, due to the steep slopes and the third hole was not ‘aced’ until 1998.  A Challenge Trophy was presented to the club by the Box Moor Trustees on its centenary in 1990, as well as a golf club dated 1895.

The Minute books were lost and then discovered in a loft in East Anglia in 1979, but the original, gold Ladysmith medal and wooden competition shield have disappeared without trace.

Today, the Club needs new members to continue its long history and uphold the joys of playing the game on this unusual and picturesque course.