Over fifty years in the hairdressing business 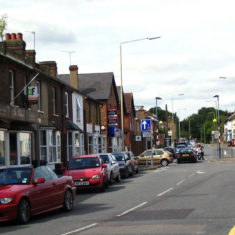 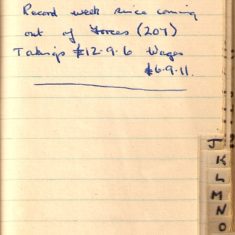 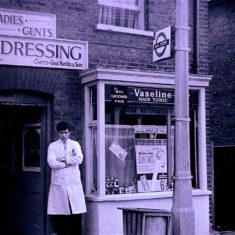 Barry outside the shop 1957
Photographer Not known 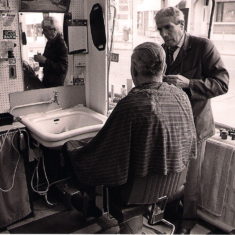 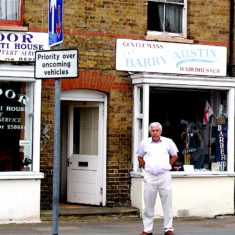 Barry outside the Shop 2011
L.C.Howard

Luke Austin was born in Harbury, Warwickshire in 1916 & lived there until he moved to Hemel Hempstead in 1930’s.  When he started work at George Mc Kay’s his customers thought he was George Mc Kay so  every one called him George and the name stuck, In Hemel he was George & in his home town he was Luke.

On the 15th August 1938 Luke started managing Mc Kay’s Hairdressers at 42 London Road in Apsley  He meet May Grimwood in Hemel Hempstead and they married in1940 and had two children a boy & a girl. When the second world war started Luke join the forces, Luke served in Egypt and India.

George set up in business with BARRY

In 1957 he set up a hairdressing business in St.  Johns Road, Boxmoor. His son Barry attended Corner Hall Secondary Modern School, when he left school Barry joined his father to learn the trade of hairdressing.

Barry was a keen football player and played for Hemel Hempstead F.C. at Crabtree Lane ground,  When the new town was being built, the football ground was taken over for housing development and  Hemel Hempstead F.C moved to Vauxhall Road, the old Brocks firework sports ground,

Barry played for Hemel town until he was 32 years old. He managed Berkhamsted town  football team In the early 80’s when they won the Sparten league 1980/81, Barry also played Veterans football until he was 66 years old, winning the national over 50’s competition in 1995 &1999. Barry still has a keen interest in football

In June1969 Barry married Diane Sear and settled in Hemel Hempstead with their two children Paul and Dean.

Barry was a familiar sight around Hemel Hempstead Hospital, where he would cut the patients hair for them. Barry also would travel to customer’s homes to cut their hair, a service he still carries on today.

After Barry’s father retired, in 1990 Barry has carried on the hairdressing business which after over fifty years, must be one of the longest family business still trading at the same premises in Boxmoor