Fanning the flames of the mysterious fire of Trowley 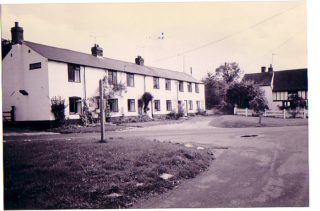 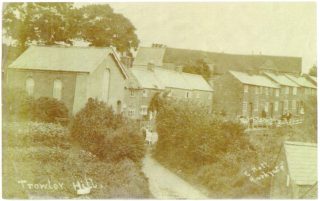 The bottom end of Trowley Hill Road c.1904 with the Primitive Methodist Chapel on the left and the outbuildings of the Blue Boar bottom right. Trowley Hill Farm Barn fills the horizon
Mary Mealey 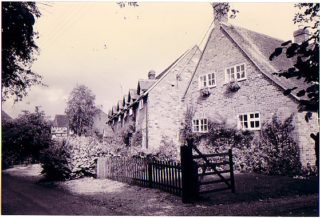 Trowley Bottom is part of Flamstead village whilst at the same time being totally isolated and separate from it, providing that is, if you know where to look for the boundary. This is because, when they built the first Flamstead Council houses in Trowley Hill Road in the 1920s, they essentially bridged the open-country gap between the two distinctly compact communities. That first batch of council houses were on the west side and subsequently further developments over the following 70 years or so have almost completed the joining of both sides, but not quite. Trowley Bottom today essentially starts where White Hill joins Trowley Hill Road. At the moment it could be said that there are about 40 houses in Trowley Bottom with about 100 residents. It is just a hamlet. There is one pub, the Rose & Crown, but no shops or chapels. A hundred and fifty years ago there were two shops, a chapel and two pubs, the Blue Boar, (later the Wheatsheaf) and the Sow & Pigs, (later the Carpenter‘s Arms, later still the Rose & Crown). Trowley Bottom occupies a neat, compact triangle with one 200 yard side following the line of the two-mile long dry valley bottom that runs from Ballingdon  to Friars Wash, more or less to Junction 9 on the M1 Motorway

Trowley Bottom appeared in the Morning Chronicle published in London on Monday 25th October 1841 (issue 22438!). What could have been of such momentous importance to warrant that? This was the newspaper that Charles Dickens had contributed to regularly in a slightly earlier period of his life. Tucked in at the bottom of a couple of letters to the Editor was the following:

“A fire broke out at Trowley Bottom, in the Parish of Flamsteadbetween Redburn and Market-street, Hertfordshire, between elevenand twelve o’clock on Thursday night, and destroyed in alltwenty-one houses, inhabited b ypoor industrious persons, whogain their living by making straw plaits for bonnets.”

There is no local tradition or collective memory of this fire, no mention of stories of it being passed down from father to son, yet it must have been of immense significance to the locals at the time.  Indeed it was deemed to be of sufficient importance to reach a national newspaper and reports of it in others have been found, though sadly no local Hertfordshire newspapers for 1841 have yet come to light. Which were these premises? What sort of premises were they? No record now, of course, but it is very likely that they would have been small timber-framed dwellings with thatched roofs and although not necessarily crammed in, they would have been quite close together. It didn’t take much for a spark from one burning thatched roof to ignite another.

There were likely to have been barns and outhouses as well, not significant enough to warrant a mention in a national newspaper report. It must have been a spectacular sight and it is very surprising that no one in Flamstead had any knowledge of such a catastrophe, until the Morning Chronicle piece was found by Flamstead resident, Simon Goodwin.

We are very fortunate in having preserved at Hertfordshire Archives and Local Studies (HALS) the Flamstead Tithe Grant which in this context is very conveniently dated 30th November 1838. This shows that the total number of dwellings in Trowley Bottom was more or less the same then as it is today, 40 or so, although most of today’s Trowley Bottom properties appear to date from two main construction periods in 1845-1880 and 1960-1990.

From the undated map that accompanies the Tithe Grant, it is possible to identify the  most likely candidates for having been consumed in the blaze. Admittedly this is all conjecture, but the total of them is 21 and that must surely be more than just a coincidence. What is more, they are all grouped together in a line along the valley bottom.  All except one of those buildings would appear to have been entirely replaced by something else between 1845 and 1880.

In 1838 it seems likely that the population of Trowley Bottom was at least twice what it is today, maybe as many as 300 people, when the population of the Parish of Flamstead as a whole at the time of the 1841 Census was 1492, but remember this figure includes perhaps a third of modern Markyate (hived off in 1897). The Primitive Methodist Chapel that was built near the bottom of Trowley Hill Road in 1845 was said to be capable of accommodating 100 people, which appears to confirm that the density of the hamlet was high.

What did they do to house perhaps half the population of the hamlet made homeless overnight? The Primitive Methodist Chapel was not built until four years later. Did the people pile their belongings onto carts and walk half a mile uphill in the middle of the night to St Leonard’s church which is at the centre of Flamstead village? It is much more likely they would have trudged, blackened and exhausted, up the steep White Hill, a mere hundred yards or so to Trowley Hill Farm Barn and bedded down there.

A word about the barn itself might be appropriate here because it no longer exists; it was derelict during the depression of the ‘30s and has since been demolished. It was long enough and tall enough to dominate the valley, it had a gable end onto Trowley Hill Road and side gable extensions at the one third and two thirds positions on the south side. It faced onto the farmyard immediately opposite the farmhouse, the yard itself being open to the lane.

The Victoria History of the County of Hertfordshire, published in four volumes over a period of time from 1902 is somewhat dismissively unkind about Trowley Bottom:

“Half a mile south of the church [St Leonard’s] is Trowley Bottom, a hamlet of somesize and consisting mainly of poorly-built cottages”.

Did the ‘dreadfully burned’ infant die? We are not told, but if it did we have a definite date and it might be possible to trace it through to the Burial Registers, which are also to be found at HALS. One of the present owners of the lower row of cottages at Trowley Bottom Farm reports that he has dug up charred brick in his back garden and that may be significant. Interestingly, the Flamstead Society is talking about organising a series of  archaeological digs in various parts of village this summer and Trowley Bottom gardens might be prime sites for that enterprise.