You are here: Home>People>Treasured sketch is a link with creative Constance

Treasured sketch is a link with creative Constance 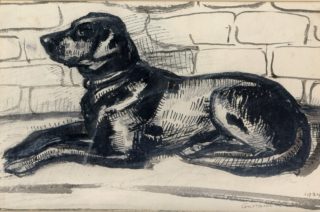 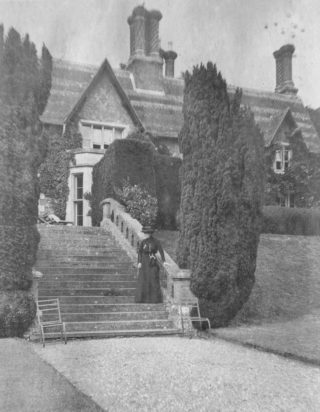 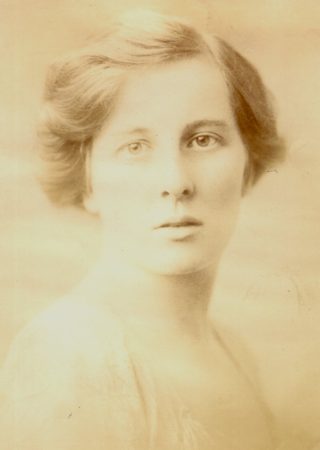 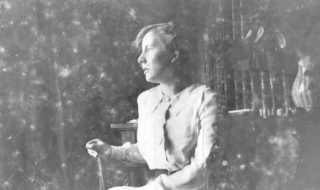 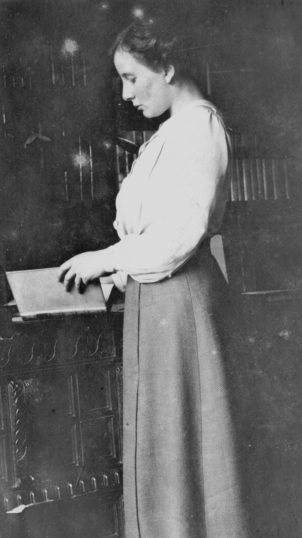 The Dacorum Heritage Trust holds an ink drawing of a dog signed by the artist, Constance Lane, dated 1924.   An extract from a local newspaper associated with it reads: “Wonderful patience was shown by a dog which accompanied Colonel Walter Halsey and his father, Sir Frederick Halsey, on the Hemel Hempstead Bench of Magistrates on Wednesday. During the proceedings which lasted from 11am to 3.30pm, the dog did not move except to retire with the Magistrates when they adjourned to the Mayor’s parlour to consider a decision.”

Constance Lane was the daughter of Rev. Charlton George Lane and Mrs Adela Henrietta Lane (nee Chetwynd-Talbot) of Little Gaddesden.Rev. Lane was born in June 1836 at Kennington where his father served as vicar. He attended WestminsterSchool and then ChristChurch, Oxford, where he showed considerable sporting ability representing the university at rowing, racquets and cricket. He later acted as tutor to the future 2nd and 3rd Earls Brownlow. On being ordained, he served first at Great Witley and then, in 1869, he arrived at Little Gaddesden and served as rector until his death in 1892.

He remained in close contact with the Brownlows of Ashridge House, as he was their private chaplain and librarian. According to Howard Senar in his book Little Gaddesden and Ashridge, “Lane’s work was revolutionary in both church and parish. The Holy Communion was celebrated more frequently, weekday services were held. Services became choral, and a choir was built up, with regular weekly practices, annual outings and dinners. There were carols at Christmas and Epiphany, Advent and Lent services and Harvest Thanksgiving. He introduced Hymns, Ancient and Modern [used until 1960] and choristers in surplices. There were adult Bible classes, lectures, readings, a glee club, a brass band, men’s meetings, clothing and medical clubs, penny banks, mothers’ meetings, a village lending library and reading room. He was remembered for his profound reverence for holy things, for his broad sympathies, for his love of art and nature, for his tact, for his sympathy and understanding. He was responsible with Earl Brownlow and Lady Marian Alford for the introduction of the organ and for the major restoration and rebuilding of the Church.”

He married Caroline Boyle in July 1871 and they had a number of children, including Adelaide and Margaret.  His first wife died in 1883 and a reredos was erected in the Church in her memory. He married his second wife, Adela Talbot, in January 1888.  Their marriage was to be short-lived as Rev. Lane died after developing a chill in November 1892. He was buried at the Church in an oak coffin made at Ashridge Estate Works and a stained glass window in the Church commemorates him.

Adela Talbot was born in Gloucester in c1856, the daughter of Rev. Hon. George Gustavus Talbot. Her first cousin was Lady Brownlow of Ashridge House and it was whilst visiting the Brownlows that she met Rev. Charlton Cole. She became his second wife and they had two children – Charlton (“Tony”) who later became a magistrate in Kenya and Constance Lane. After Rev. Lane’s death in 1892, Adela and the children moved from Little Gaddesden to Nettleden House, which move was arranged for them by the Brownlows. Adela established a music festival in Little Gaddesden which grew to become the Mid & West Herts. Musical Festival. She was also President of Potten End Mother’s Union and Vice President of the Linen League. She died in March 1936 aged 79. According to her obituary in the Gazette: “The affection with which she was held by the people of Nettleden was demonstrated this week when they asked that her mortal remains should rest in the Parish Church [of Nettleden] although it had been intended that they should be taken to Little Gaddesden”.

Constance Lane (known as ‘Cooy’ – pronounced ‘Coo-ee’) was born in Little Gaddesden in 1892, the same year her father died. She trained as an artist at the SladeSchool in London and worked as a professional artist in Chelsea during the 1920s and 1930s. She became a good friend of many leading contemporary artists, such as  Dora Carrington, with whom she painted three frescoes in Ashridge House. She also set up a studio at Nettleden House and lived nearby at a cottage in St Margaret’s. According to the Gazette of March 1936, she was “an artist of wide reputation whose works have been established at local exhibitions as well as many other larger shows in London.” She died in 1944.

A letter was sent to Nicholas Halsey of Gaddesden Home Farm to see if he knew anything about the dog. He passed the letter to Mrs Agatha Bainbridge, Sir Walter Halsey’s eldest surviving daughter, who now lives in Tasmania.

Her response was as follows:

I enjoyed your letter with the drawing of my father’s beloved Joby, a dog of enormous charm and character. I believe that the original Joby was popular with the boys at Eton and refurbished their top hats when my father was there in the 1880s.

Joby was acquired as a puppy in 1921or 22, and handed to the Gaddesden keeper to be trained as a gun dog by him and in the house by his wife. Mrs. Bolt was also a great character, frequently stating that “Hi ‘ave hevery ‘ope that…” My father bought a dozen bottles of her dandelion wine and put it down for three years, after which it was delicious and strong. She taught Joby to lie under the kitchen table, the only place in the cottage where there was room; but it had disastrous results when he came to join us at Westfield, he got under the small drop-side tea table quite successfully, but trying to extricate himself caused chaos.

When we went to Gaddesden in 1923 in the evening in the car he used to go to meet my father, and stayed with him until he left for London in the morning, then returned to the keeper for the day.  As a gun dog he had to be restrained during drives so was fixed to my father’s belt by his lead, he was far too impatient to wait until told to ‘fetch’ but would wait indefinitely at a meeting or church.  My father had been a JP at Hatfield, but I did not know that they had sat on the bench together…

Cooy Lane was a singer as well as an artist and very patient with old Mrs. Lane, who always struck me as slightly dotty; she was perpetually worried about the gravel sweep in front of their house, which had obviously been recently re-gravelled. “Cars do not keep the weeds down as horses and carriages used to.”

My Father would say that there will be a political or other meeting on the ?th of next month and we shall need a concert for it; much the most successful way of attracting people to sing, act or otherwise entertain. I then had to hunt for people to come and help. Cooy was one of my life lines, she always came to help and was very popular.”