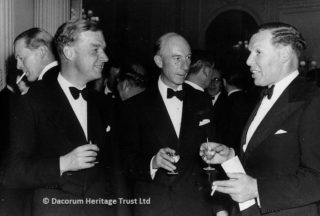 Roger Wallers at a dinner of the Paper Trade Golfing Society (the year he was Captain) with Dr Colin Gregory (guest speaker on far right) and Tyrell Young (left), 1953
Dacorum Heritage Trust 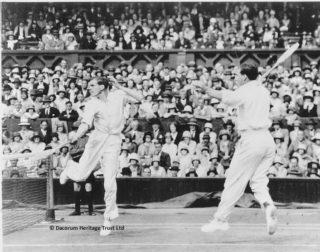 Dr JC Gregory (right) in action with his partner, Ian Collins, in the Men's Doubles at Wimbledon
Dacorum Heritage Trust 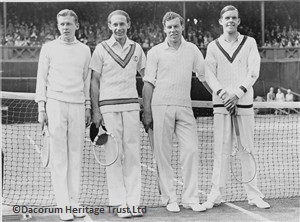 The title of Dacorum’s greatest sporting hero should go to J.C Gregory for his achievements in the world of tennis, even though he was only an adopted son of the borough. John Colin Gregory was born Yorkshire on 28th July 1903 but spent his working life in his surgery on Alexandra Road, Hemel Hempstead.

He represented England in the Davis Cup in 1926 and from then until 1930 represented his country in 13 ties. Then came the war years and afterwards he was non-playing captain of the British Davis Cup Team from 1949 to 1952. He was with the team in Belgrade that last year when Geoff Paish was injured and needed to be replaced as partner to Tony Mottram in the doubles. Colin played himself, by then he was aged 49, and they beat S.Laszlo and J.Palada 6-4, 1-6, 9-11, 6-2,6-2, so that Britain won the tie 3-2.

Twice he was a singles quarter finalist at Wimbledon and reached the final in the men’s doubles there in 1929. From 1955 he was chairman of the All England Lawn Tennis and Croquet Club and it was in his dressing room at Wimbledon that he died on 10th January 1959 after playing tennis with his son and daughter and Dan Maskell.

In 1934 he came to Hemel Hempstead to join in practice with Doctors Gilroy and Young, who had their surgery at the bottom end of Alexandra Road, almost opposite the old Fire Station. Two years later, Dr Gilroy retired and the practice was renamed Young, Gregory and Gilruth. At this point Dr Gregory was appointed physician to West Herts Hospital with responsibility for medical and maternity patients. In his early days he lived at Barton Lodge, which was at the junction of Midland Road and Alexandra Road. Later he moved to Orchard Lea in Tile Kiln Lane, Bennetts End.