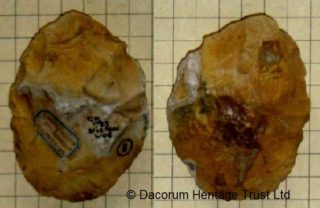 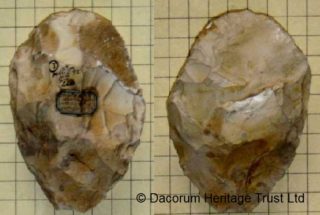 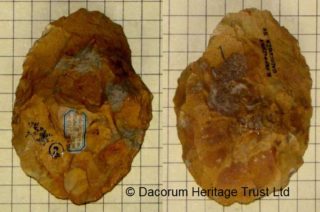 Worthington G. Smith was a freelance illustrator and eminent amateur archaeologist.  His main interest concerned finding evidence of early man in this area.  By 1884, his studies had reached the point when he could publish Man the Primeval Savage, a book that is still referred to and quoted today.  Prior to this, he had written articles in the Journal for the Anthropological Institute and the Transactions of the Essex Field Club.

In the early 1890s, he found evidence in the clay pits at Caddington of some of the earliest human activity in Britain.  The clay pits supplied the brickworks of the Luton area.  Below the clay was a layer of flints dating from the Lower Palaeolithic period.  He later found similar deposits at Gaddesden Row and Leverstock Green.  Mixed in with the flints were the bones of elephant and rhinoceros.  These deposits have since been dated to the last inter-glacial period, between 125, 00 BC and 70,000 BC.

His work was meticulous.   Each of his flints has a WGS number with the site and the date it was found written on it.

Worthington Smith lived in Dunstable, but managed to visit regularly almost every pit, building site, or road excavation in north and east London and much of Essex.  His flowing cloak and wide-brimmed hat were a familiar sight on the many excursions of the Geologists’ Association, which he either attended or led.

He was a contemporary of Sir John Evans and his son, Sir Arthur Evans.  Smith and Sir John often worked together on the local flints.  Sir John studied the flints, coins and bronzes of the continent and further afield and wrote important books on each of the subjects.  Sir Arthur was made famous by his discoveries at Knossos on Crete and his studies of the Minoan civilisation.

Worthington G Smith was a great archaeologist who has not been given credit for the enormous contribution he made to the study of flint implements and of early man in this area and he and his works deserve to be better known.