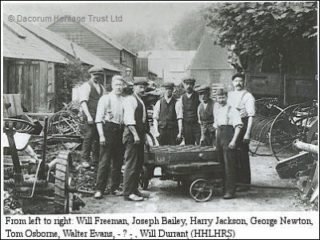 Over the last 30 years the Dacorum Heritage Trust has produced many exhibitions connected with the area. Both “Agriculture in Dacorum” and “Archaeology in Dacorum” have explored the farming background in some detail, and some of this information is reflected here, giving a relevant context to the work of local agricultural engineers and farm implement manufacturers. The fascinating story of ironfounding in the area is also detailed, as well as the history of the plough and the ceremonies associated with it.
We hope the resulting book will serve as an adequate tribute to all the families, ironworkers and farmers who were once part of the story of Boxmoor Ironworks. Men of Iron is a full colour A5 size publication of 128 pages, now available from Dacorum Heritage Trust.

The title of the Ironworks is misleading, since the premises were located in the Marlowes, Hemel Hempstead, but in the pre-New Town Days many households and businesses at the lower end of the Marlowes, being in Boxmoor parish, actually had Boxmoor phone numbers.

This important local business was established in Marlowes by Richard Davis of Great Missenden in 1855. It was situated on land currently occupied by Bank Court, having been demolished upon the development of Hemel Hempstead New Town shortly after the Second World War. The business quickly developed into a specialist producer of a wide variety of good quality agricultural implements with the provision of a repair service second to none. By 1929, the work force was made up of about thirty men and boys plus one girl.

The history of Boxmoor Iron Works as recorded in Kelly’s Directories:

The full article was included in the ‘Agriculture in Dacorum’ exhibition handbook of 1990. This handbook is of more than fifty pages and contains many similar articles on the local agricultural scene.

James Davis was the son of Richard Davis of Great Missenden and a Miss Wren, a possible descendent of the architect Christopher Wren, who were married at Swallowfield in 1810. By the year 1855, James was established as an iron founder in Marlowes, with a family of one son, William Nash, and three daughters, Elizabeth, Matilda and Emma. The business developed quickly in the field of agricultural implements and William travelled extensively as a representative of Davis and Son, until his untimely death in 1871, at the age of 27. Matilda married a Mr.Lane and Emma married Joe Bailey of Chambersbury House.

By 1886, the business was known as Davis and Lane. James Lane lived at Parkhill, Hemel Hempstead, but he emigrated to New Zealand and the company soon became Davis and Bailey. It is believed that the foundry was burnt down at an early stage of its history, probably before 1870, and then later rebuilt.

The firm were specialists in their field, enjoying an enviable reputation for good products, and the provision of a repair service second to none. Indeed, it was a maxim of the firm that no job was refused and every effort was to be made to keep the customers’ machinery working.

They were prominent employers in the town, in the main using old type craftsmen. At one time, almost all the men of working age residing in Bridge Street were employed by the firm and the payroll carried the names of many old Hemel families.

The works were situated in a spot roughly where Bank Court is today, and consisted of a large yard fronting on to Marlowes and running back to the river Gade.

Situated at the north corner of the frontage was a rather large house in which resided the Works Manager, Benjamin Bailey, a bachelor cared for by a housekeeper. Joe Bailey continued to live at Chambersbury House, Leverstock Green. The works also consisted of a large open yard, along the sides of which were carpentry, blacksmiths and machine shops. Along the bottom of the yard bordering the river was a large foundry which housed a smelting furnace. This foundry looked like a museum, the walls being festooned with wooden patterns and templates. The yard also contained a boiler house and a small office.

By 1929, the work force was made up of about thirty men and boys, and one girl. The carpenters’ shop at that time was presided over by Jim Sells, a dour old gentleman, his staff consisting of Charlie Puddephat, Fred Picton and Jack Beasley. The machine shop was the domain of the Walker family, Jim, his brother Syd and Syd’s son. The foundry was in the capable hands of Will Freeman, with Frank Davis, Jesse Potten and Bert Page as his assistants.

The firm was seldom short of work and during haytime, harvest and autumn ploughing, things could become hectic, the foundry in particular working long hours to supply the demand for ploughshares. Many ploughmen visited the works to have the ploughs set to their own requirements. The firm’s ability to repair and supply on demand is mentioned by Tony Harman of Whelpley Hill in his very popular book, ‘Seventy Summers’.

The success of the firm was largely due to it being under the supervision of Joseph Bailey, who, being a farmer on a large scale himself, was conversant with the problems that faced his customers. He farmed land extending from Catsdell to Bunkers Lane. His farms consisted of High Street Farm, supervised by George Bailey, Westwick Row Farm run by Hugh Bailey and Bunkers Farm, where Mr. Dollimore’s father was foreman.

After the Second World War, with the advent of more sophisticated machinery, the firm was gradually run down and finally closed with Mr. Bailey’s death in 1949. The beam engine was taken into store at the Science Museum.

It is quite surprising that so little information is generally available for such a substantial local business that played so prominent a part in the history of Hemel Hempstead for nearly one hundred years.

I wish to acknowledge that the early history featured on this page is due to the kind assistance offered by Rex Davis and Harry Howe. In particular, I acknowledge the extensive information provided by Sydney Dollimore for the years 1929 and 1930, when he worked for the company. – Roger Hands