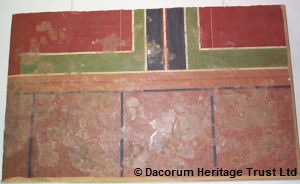 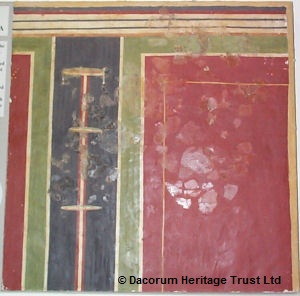 Sir John Evans undertook the first excavation at the site, in 1852, in the grounds of Boxmoor House in Box Lane. In the 1950’s the house, then the property of Hertfordshire County Council, was made into a school. When the school was to be enlarged, excavation was carried out by the Hemel Hemsptead Excavation Society, under the direction of David Neal, between 1966 and 1970.

The earliest phase found a simple timber structure built directly on the clay subsoil during the late first century. This building was deliberately demolished by burning in the early second century to clear the site for the Period II and III (c.130-150 A.D.). The new building had walls of mixed clay and chalk (cob) and was provided with a mosaic found by Evans in 1852, but later destroyed.

During the third century, the villa was largely rebuilt and mortared flint walls were added over the cob walls. The last phase dated to the first half of the fourth century when the villa was reduced from eleven rooms to seven and an underfloor heating system was inserted into one of the rooms. Later in the century, the number of rooms was reduced to five.

The villa appears to have changed from a ‘residential’ to a ‘functional’ use, possibly being used as a workshop. In its heyday, the villa had been elaborately decorated with at least three mosaics, as well as ornamental and figured plaster.