Dressing to impress is not a new concept! 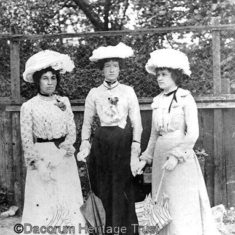 Photo of Ethel, Kate and Lilly taken by their father, the Boxmoor photographer Fred Margrave, early 1900s. Note their large hats, gloves and parasols, which were obligitory accessories for many occasions
Dacorum Heritage Trust 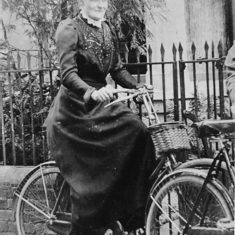 Miss Letita Lurrel on a bicycle outside her house in Alexandra Road, Hemel Hempstead, late 1800s. Notice the extra guard under the mud guard which would prevent the skirt becoming trapped in the spokes of the wheel.
Dacorum Heritage Trust 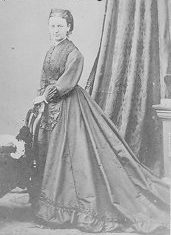 By the late 1860s and early 1870s it became the fashion to wear a skirt, which was flatter at the front, with a bustle and long train at the back.
Dacorum Heritage Trust 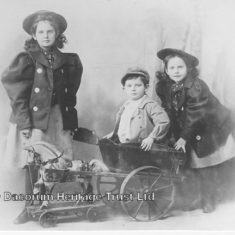 Innes, Nigel and Phyllis Hadden, this is a good example of sisters dressed in identical clothes. During the late 1800s an age related skirt length would be employed, with the eldest sister wearing the longest skirt.
Dacorum Heritage Trust

The collections of the Dacorum Heritage Trust reveal that the inhabitants of Dacorum have always had a passion for fashion.

A look at the changing fashion is a fascinating glimpse into the past. Costume can provide us with a relatively accurate dating tool and therefore when looking at a photograph, it is usually the clothes worn by the sitter which evoke a certain era. Whilst the buildings and scenery may significantly change, it is the people in the photographs who provide the clues.

The majority of early portrait photographs were taken at a time when visiting a photographer was a relatively expensive affair. Sitters would therefore wear ‘their Sunday best’. Although we cannot see the use of colour, a close inspection reveals intricate details such as frills, ribbons and complex stitching, possibly due to improvements in sewing machine technology in the mid 18th century. Women’s large embellished hats were often decorated with flowers, feathers and furs. Hats and bonnets were always worn and provided a vehicle for further decoration and adornment.

Even the fashions of photography itself can help to date a picture. During the 1860’s a chair was often used as a prop for the sitter to rest their hands on and heavy curtains are sometimes seen in the background. From the late 1890’s studio portraits concentrate on the face of the sitter, rather than a full-length portrait.

The development of department stores and boutiques at the turn of the century allowed for a range of ready-made clothes. Fashion was becoming within the reach of all, not simply those who could afford made to measure clothes. The introduction of man made materials, such as nylon and polyester, combined with a mass production of clothes has not only altered the way we dress, but also the way in which we view clothes.Changes in society have in turn modified fashions, the elaborate dresses and hats of the nineteenth century frequently required a servant to help a lady to dress and a fashionable lady would often change outfits up to five times a day. Without the luxury of servants and time, such flamboyant clothes became impractical. Fashion reflects these changing roles, for example women’s war work during the 1940s often necessitated the need to wear trousers and the ‘power suit’ of the 1980s symbolised the rise of women working in previously male environments.

In latter years the etiquette and formality surrounding dress have changed. People often dress for comfort, indeed casual and leisurewear are relatively modern concepts and in many cases clothes are unisex.